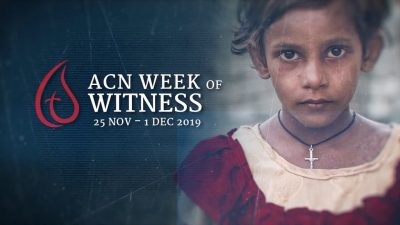 “Why is it Christians still suffer so much intimidation and discrimination?” Bishop Michael Router asked on Sunday as he revealed that 4,305 Christians were killed for their faith over the past two years.

Launching the ‘Week of Witness’, which is an invitation to Christians across the island of Ireland to stand in solidarity with, and bear witness to the heroic example of persecuted Christians around the world, Bishop Router highlighted that there are many places where the treatment of Christians has gone beyond harassment and intimidation.

He highlighted that 1,847 churches and other Christian places of worship were attacked between 2017 and 2019, and 3,150 Christians were detained without trial, arrested, sentenced or imprisoned.

The statistics on the persecution and martyrdom of Christians since 2017 were contained in the Aid to the Church in Need’s report ‘Persecuted and Forgotten’.

The report shows that between 2017 and 2019 Christians were the victims of 80% of all persecution worldwide.

“Such persecution and suffering is still experienced by many Catholics and by Christian’s around the world. Today we pray for those who are suffering for their faith in this ‘Week of Witness’ – a week to remember the martyrs of yesterday and today,” Bishop Router said in his homily at St Patrick’s Cathedral Armagh.

Acknowledging that there are probably many different reasons, including political and social reasons, he said in some places it was because the Christian Churches challenge the systems of injustice, oppression and brute force that exist.

“True Christianity has always stood for the rights of everyone particularly the basic rights that come before all else; the right to life, the right to food and shelter, the right to education. Often in defending these rights Christians have had to stand against the powerful, the wealthy and the tyrannical and have suffered as a result.”

The Week of Witness is organised and promoted by the Catholic charity Aid to the Church in Need and is held every year from 25 November to 1 December.

Talks and exhibitions are taking place throughout Ireland on the theme of Christian persecution.

Next week, ACN Ireland will hold the Red Wednesday Prayer Vigil with the assistance of dioceses and parishes throughout the country. Red Wednesday is an opportunity for the faithful to gather as a community to pray not just for persecuted Christians – but also for the persecutors of Christians.

In his homily, Bishop Router recalled how over the past year the bombing on Easter Sunday of Catholic Churches and Christian places of worship had taken place in Sri Lanka leaving 259 people dead and hundreds injured.

In January two bombs went off inside and outside the Cathedral of Our Lady of Mount Carmel in the Philippines killing 22 people and between February and April more than 300 were killed in a series of attacks on Christians in the Northern Nigerian states of Kaduna and Adamawa.

North Korea is the number one country on the World Watch List for persecution according to Open Doors’ annual ranking of the 50 countries where Christians are most persecuted for their faith.

It is estimated that there are between 200,000 and 400,000 secret Christians in the communist state, and that nearly 70,000 of them are being held in horrific labour camps because of their faith.

Bishop Router recounted the story of Hea Woo, a North Korean Christian who spent time in one of these prison camps.

In her account of life in the camp she said that the authorities and the guards were merciless. They constantly kicked her and beat her with sticks. Many of the inmates died on a daily basis, their bodies burned, and the ashes scattered on the paths around the camp.

Yet even in the horror of her incarceration she felt that God was at work and that He helped her to survive and inspired her to evangelise the other prisoners.

She set up a small group of five others who met together in a toilet; the only place that was out of view of the guards. There they held a short service exchanging bible verses and quietly singing hymns such as ‘Amazing Grace’.

These moments of prayer and togetherness helped Hea Woo to survive and she was eventually released before escaping to South Korea.

On Sunday, Bishop Router stressed that listening to such stories many result in people overlooking persecution closer to home.

“It may not be on a scale found in those countries but in many western countries – even here in Ireland – to publicly espouse Christian ideals can lead to ridicule, insult and aggression.”

“So today, and everyday, we are all called to be witnesses and to take on a kind of martyrdom in standing up for what we believe in and what we know is right and just. We need the strength and courage of St Oliver Plunkett and the conviction and hope of Hae Woo to live the Christian faith in an increasingly hostile world.”

Speaking on the feast of Christ the King Dr Router said, “We are reminded that Jesus’ suffering and death brought about a transformation in the world. Despite the ongoing violence, persecution and oppression, we must believe that through Christ the victory is won and, ultimately, we have nothing to fear. Through the blood of the martyrs, and the pain of the persecuted, a light is being shone even in the darkest places. So, stand and let your light shine and commend your spirit, your future, your life, into the hands of God.”

On Tuesday 26 November at 7.30pm, author Jean Harrington will give an address on martyrdom in the 21st century based on her book ‘Murder in the Missions’ in the Diocesan Pastoral Centre, The Magnet, The Demense, Dundalk, Co Louth.

Archbishop Eamon Martin will celebrate the liturgy for Red Wednesday in St Patrick’s Cathedral Armagh on 27 November at 7.30pm.