4 Corners Festival for an open Belfast

A man who used to ‘parade’ with the Orange Order in front of St Patrick’s Church on Donegall Street in Belfast spoke this week from within its walls about his faith and work as a peace activist.

However, it was not until years later in Timor that he found through friendship with another missionary, a Catholic priest from Dundalk, that “the only way to understand another person’s faith is through direct contact”.

Subsequently when he returned to Belfast he got to know Fr Gerry Reynolds from Clonard Monastery, and together they worked for pace, each attending the funerals of those killed by opposite sides in The Troubles. 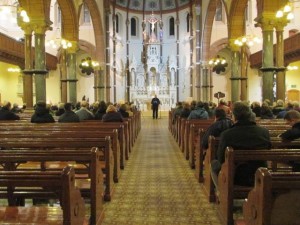 Rev Ken Newell said that the grief on each side was identical.

The 4 Corners Festival in Belfast running all this week and Rev Newell’s experience is what it is all about according to Fr Martin Magill, parish priest of Sacred Heart parish Belfast.

He said that the festival came about almost by accident as he and a Presbyterian minister realised that both were living and working in Belfast but there were large parts of the city that they did not know.

“The reason was the legacy of the Troubles, because people kept to their own part of the city, they did not venture elsewhere, and even today people still do not go to certain parts of Belfast because of the perceptions they have.”

“We gave a subtitle to the 4Corners Festival – ‘Bringing Belfast Together’. We want people to see that this city is for everyone – everybody is welcome in every part of the city,” he said. 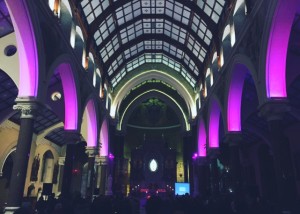 So far the festival events have focused on welcoming people who are new to Northern Ireland from other countries.

There was a walking tour of churches where people of various denominations visited each other’s churches.

They went from St George’s, High Street (Church of Ireland) then to the First Belfast Presbyterian Church in Rosemary Street (Non-subscribing Presbyterian).

In each church they were welcomed by the Minister or a parishioner who spoke about the life and ministry of that congregation.

Clonard monastery church was the venue for the NUA event.

“The majority of people who went to that event were Protestant and the most people in that church hadn’t seen it before and that was an amazing experience of praying and being together,” said Fr Magill. 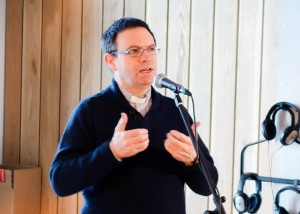 The festival has been going for four years now and he feels it is going from strength to strength.

On Friday, there is a gathering of students from Belfast schools to speak about what they think of the city and its future. Art and music come to the fore on Saturday.

On Sunday to conclude the festival is the Dreamers and Visionaries Share Dreams and Visions at St Nicholas’ Church, Lisburn Road.