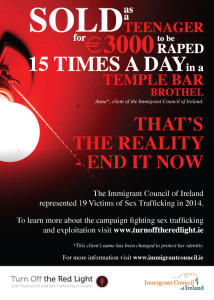 Thirty-one trafficked women sought support in Ireland in 2015 and the country is fast becoming a destination country the Immigrant Council of Ireland has warned.

The Council stated that its preliminary figures confirm that the women it supported were trafficked into Ireland from Europe, Africa, Asia and South America.

“Of the 31 women who sought the protection and support of our frontline services and independent law centre, 11 were new cases – making the year the second busiest since we started work in this area a decade ago,” said Catherine Cosgrave, Legal Services Manager with the Immigrant Council of Ireland.

She explained that it is vital to remove these women and girls from the ‘clutches’ of pimps and sex- traffickers.

The women need help with being officially recognised as a victim of trafficking, as well as with immigration and visa issues, asylum applications and supports to restart their lives.

“With women from four continents seeking our services it is clear that Ireland is a destination country for criminal networks with a global reach and we need laws and procedures in place which will jail the guilty while at the same time ensure that their victims are protected and supported,” said Catherine Cosgrave.

Laws aimed at protecting and supporting victims will be the focus of an international legal conference hosted by the Immigrant Council in Dublin on Thursday next (14 January).

As regards Irish laws, agencies working with victims of sex trafficking in Ireland fully support proposed new legislation and again call on the Minister for Justice, Frances Fitzgerald, to enact them before the General Election.

“In the coming week the Oireachtas will resume its debate on sex buyer laws which will smash the business model allowing organised crime to pocket millions,” said Brian Killoran, Chief Executive of the Immigrant Council of Ireland. 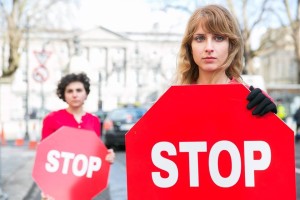 Those seeking refuge in Europe, especially children and women refugees, risk sexual exploitation and trafficking on their journey, according to an Al Jazeera report.

It also highlighted the United Nations High Commission for Refugees (UNHCR)’s assertion that women travelling alone face a heightened risk of abuse as they move through Europe or stop in cramped reception centres.

Data collected by Missing Children Europe, a network of 30 European NGOs, states that more than half of unaccompanied minors go missing within the first 48 hours from their arrival at the facility and most are never found.

No proper investigation is conducted and when a child goes missing, a certain amount of time has to pass before the disappearance can be notified to the police, even if the child has a history of being trafficked or sexually abused.

The lack of available information on a refugee child makes it even more difficult for the authorities to track him or her down.

The European law enforcement agency EUROPOL has identified groups who smuggle for profit and then force the victims into sexual exploitation and drug dealing.

EUROPOL also highlighted the rise in children beginning their journey with their family but then getting lost or separated along the way.

The Smile of the Child, a Greek non-profit voluntary organisation, has helped families leaving children with smugglers or friends to move faster to their final destination.

When the families later look for the child, they have disappeared, having been either abandoned by their minder or trafficked.