Home > Featured > Court backs Sisters’ right not to give contraceptives

Court backs Sisters’ right not to give contraceptives

In what has been called ‘the big win for the little sisters’, the US Supreme Court unanimously ruled that the US government cannot fine the Little Sisters of the Poor for refusing contraceptives under their health plans.

The Supreme Court vacated the lower court’s previous rulings against the Little Sisters, after the government agreed to provide free services (including contraceptives) to women without involving the Sisters or their plan.

“All we have ever wanted to do is serve the neediest among us as if they were Christ himself,” said Sr Loraine Marie Maguire, mother provincial for the Little Sisters of the Poor. “We look forward to serving the elderly poor for another 175 years to come.” 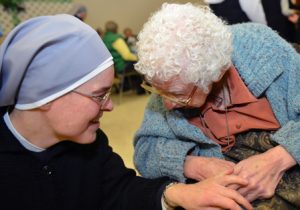 The US Supreme Court decision has much wider implications.

“This is a game-changer. This unanimous decision is a huge win for the Little Sisters, religious liberty, and all Americans,” said Mark Rienzi, senior counsel at The Becket Fund for Religious Liberty, which took on the court appeal on behalf of the sisters.

“The Court has eliminated all of the wrong decisions from the lower courts and protected the Little Sisters from government fines.”

In January, the US Department of Health and Human Services (HHS) issued a mandate under the Affordable Care Act (Obamacare) that requires all employer health plans to provide free contraceptives, sterilisations and abortion-inducing drugs, regardless of any moral or religious objections.

The Little Sisters expected that their religious beliefs would be protected, but the government created a new regulation requiring them to change their healthcare plan to offer the services that violate Catholic teaching.

At the same time, 1 in 3 Americans did not have a plan that was subject to the same mandate HHS.

For example Exxon, Chevron, and Pepsi, and other large corporations, were exempt from the mandate, because they never changed their plans which were grandfathered. The government did not even require US military to provide these services through their family insurance.

When it came to the Little Sisters, the government argued that since it offered to reimburse the costs of the services that the sisters would provide, then they should have no moral objection to offering them.

The Little Sisters said that this was not about money but about conscience, and whether they should be forced to change their healthcare plan to offer services they have a moral objection to, when those services could be provided more effectively through the government’s healthcare exchange.

The sisters never sought to prevent the government from providing these services, but asked that the government pick a way that would not force them to deliver services — like the week-after pill — that violate their faith.

“The Little Sisters won, but what this unanimous ruling shows is that there was never a need for anyone to lose,” said Mark Rienzi.

“The government will still be able to meet its goal of providing these free services to women who want them—not just for those with religious plans—but for the tens of millions in exempted corporate and government plans.”

Other parties in this case include Geneva College, Southern Nazarene University, the Roman Catholic Archbishop of Washington, and the Most Reverend David A. Zubik. All of these clients also had the adverse decisions in their cases vacated and sent back to the lower courts.

In court, the Little Sisters of the Poor were represented by the Becket Fund for Religious Liberty, Locke Lord LLP, and Professor Kevin Walsh of the University of Richmond Law School, in the supreme court.

The Becket Fund for Religious Liberty is a non-profit, public-interest law firm dedicated to protecting the free expression of all religious traditions.

For over 20 years, it has defended clients of all faiths, including Buddhists, Christians, Jews.

The Becket Fund has defended the assertion that religious groups should be free from government interference when they choose their leaders.

It also prevented the Wisconsin-based Freedom From Religion Foundation from removing a privately owned and maintained statue of Jesus.