In excess of two million people from all over the world are expected to attend World Youth Day (WYD), July 26-31, in Krakow, Poland.

Many Irish people are already enroute. The Missionaries of the Sacred Heart (MSC) group of 18 from Dublin, Galway and Cork have joined with a much larger group from Birmingham to travel by bus.

“They are really looking forward to it. They probably don’t know what to expect. For the group I took to Rio, it was an incredible experience,” said Fr Alan Neville, MSC Vocations Director. He explained how the almost two million on Copacabana Beach were asked by Pope Francis to have two minutes silence after communion at the concluding mass. “Young people in silent prayer for two minutes –wonderful – they were blown away.” 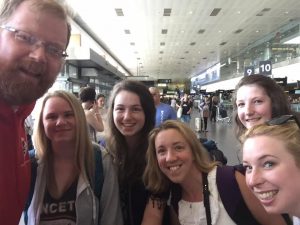 At the airport some of the MSC group with Fr Alan

Young people of the Diocese of Meath had celebrated Mass in the crypt of the Cathedral of St Bavo in Ghent when Catholicireland.net spoke to them on Tuesday (19 July). They came across the chapel in which their very own local Saint Oliver Plunkett was consecrated Archbishop of Armagh on his way home from Rome in 1669.

The group of 50 are travelling by bus to WYD. First they will stop at the Diocese of Plock where they will be hosted by local Polish families. They will visit Auschwitz concentration camp on the way to Krakow.

Fr Kevin Heery from the parish of Navan, told CatholicIreland that there are people from parishes all over the diocese from Mullingar to Glasson. Two sisters from the Franciscan Sisters of the Renewal in Drogheda are also making the journey. The youngest person has just complete the Leaving Cert others are working as teachers, a computer programmer and stock broker. They heard of WYD through the many information days, emails and publicity but also from friends.

“A lot of it is word of mouth, ‘I heard about WYD from someone who went to the last one and I want to go myself’. It is to do with the enthusiasm coming back from WYD and they think ‘I want some of that. When is it on again?’” 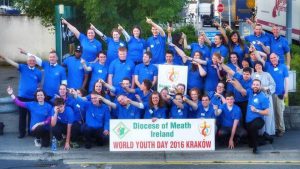 The Diocese of Galway, Kilmacduagh and Kilfenora is being represented at WYD by 15 of the Oranmore-Maree Youth Group (OMYG). They have spent months of preparation and fundraising. They will stay for six nights with relatives of a Polish/Oranmore family who have organised a full programme of events for them, as well as joining in all the WYD activities.

Fr Daniel Gallagher, who was ordained just last Sunday (17th July) in Galway city, is travelling with the group, as well as  young Oranmore deacon who will be ordained in his native parish next summer, Rev Declan Lohan.

Fr Daniel spent time during the last year of his preparation for priesthood in the Parish of Oranmore and said of WYD: “We have prepared together; we have gotten to know and trust one another and we look forward to being pilgrims together.”

The Parish Priest of Oranmore, Fr Diarmuid Hogan, expressed his pride in the young people travelling and said they have given much to their parish, and said: “I hope they have the time of their lives there.”
He added that OMYG is fortunate has received so much support from people at home but in particular from “good friends in Krakōw who have opened their house and heart to us”.

OMYG is very involved in the parish in pastoral, social and liturgical activities, is already planning to participate in the Diocesan Pilgrimage to Lourdes next summer. 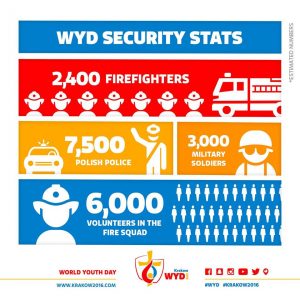 In recent days Polish officials and WYD organisers have issued statistics about security for the mammoth event. This includes: 20,000 police officers; more than 2,400 professional firefighters; 800 government protection bureau agents; and 1,500 officers of boarder control. There are also more than 6000 in a volunteer fire brigade joining wth the security force in Poland.

Pope Francis has chosen a theme of “Blessed are the merciful, for they will receive mercy” (Matthew 5:7), in what is the Jubilee Year of Mercy. The first WYD was stated by Pope Saint John Paul II in 1983 and the last one was in Rio De Janeiro, Brazil in 2013, the first for Pope Francis.

Over five days there will be diocesan visits, concerts, catechesis, cultural events, daily mass, outdoor stations of the cross, reconciliation, culminating in an outdoor vigil on Saturday night and Holy Mass on Sunday with the Pope.