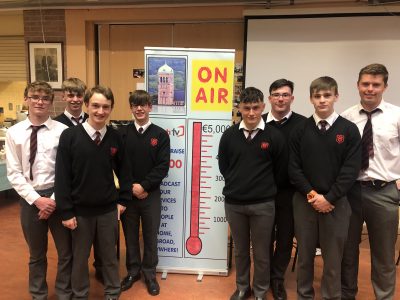 Parishioners can follow Mass and other liturgies from their own homes via Parish TV webcam thanks to Transition Year students in Clonmel.

The teenagers from High School in the Co. Tipperary town raised €5,000 and organised installation of the high-tech TV service which has had 10,000 international viewers since Easter and has the possibility of being on RTÉ Player in the future.

When the school chaplain, Fr Michael Toomey, suggested the TV project back in September 2018, the Transition Year students jumped at it as part of their Pope John Paul II Award.

They researched the need for a web-based service for parishioners. They found that the service would most benefit the elderly at home who cannot attend Mass regularly, but also those with family around the world who cannot get back to Clonmel for funerals, weddings, baptisms and other parish events.

“The benefit of this service was immediate and personal to the school,” said Fr Michael Toomey. “A member of staff had a bereavement and some family could not come home for the funeral from Australia. So, the first funeral we had available [on the new church TV/webcam service] assisted this member of staff’s family.”

To raise the necessary funds the teenagers sold poinsettias for the church altar at Christmas, produced and sold calendars, held a quiz night, and sought sponsorship and donations from local businesses.

They visited Church Services TV (CSTV) head office in Bray, Co. Wicklow, to see for themselves how this service has helped parishes and other religious organisations expand their reach.

They saw that once TV cameras are installed in churches, live filming and streaming of church services can be viewed on PCs (personal computers), laptops, mobile devices and TV sets anywhere in the world. With this technology, those abroad or confined to their home can keep in touch with their parish and continue to be part of the local community.

The students also went behind the scenes at Bray to see how the system works. They helped with design, communication and setting out a business plan for their own church TV service. They also learned that the Parish TV system will be available on the RTÉ Player service in the near future.

Director of CSTV, Tony Bolger, gave them an overview and said afterwards: “We enjoyed having the team from the High School here, and hope there was value in the experience for the students.” Once back in Clonmel, they completed the project ahead of time and the TV system went live in the church by Easter.

At the school graduation and Pope John Paul II Awards ceremony on Monday (20 May 2019), Fr Michael Toomey praised the group for their commitment and dedication week in, week out, and their teachers Mr O’Gorman, Miss O’Sullivan and Ms O’Dwyer for all their support. “Your parents and we the staff here are so proud of this remarkable achievement and I commend you all for your dedication and commitment,” he told the students.

Already there have been over 10,000 views of the service internationally, and children recently making their First Holy Communion were able to look at the Mass afterwards on the catch-up service. People can access the service on www.churchservices.tv, search for ‘Clonmel’ and see both SS Peter & Paul’s and St Mary’s churches available. Other videos and interesting programmes are also available. There is a church services TV app available on the App Store and Android.

Separately in Clonmel Fr Michael Toomey made a special appeal at weekend Masses on behalf of a family that has recently become homeless. Describing their situation as “truly heartbreaking”, Fr Toomey told parishioners at SS Peter & Paul’s parish that the family, which includes a little girl and a baby on the way, had been renting a house. However, the owner had sold it and the family have been accommodated by the council in a local B&B on a weekly basis.

“The biggest frustration is why it appears no one is talking to this couple from the housing department, and why are there so many vacant houses, some owned by the council, when there are so many people like this particular family literally walking the streets of Clonmel every day?” said Fr Michael Toomey.

After the Masses, he received several calls and offers of help, including some people who are willing to allow the family to access their houses during the day.