Missing family, friends and home is the most common difficulty encountered by young Irish emigrants according to survey findings published on a new website geared towards helping those planning to emigrate.

The website www.mindhowyougo.ie was launched on Thursday by the Minister for the Diaspora, Jimmy Deenihan, who said it seeks to assist future emigrants by providing simple but effective advice and tools to deal with the inevitable challenges of emigration.

“This ranges from pre-departure preparations to early days abroad when the initial experience may not match expectations.”

“For those that are experiencing particular difficulties very practical advice is provided on coping mechanisms. I believe that both current and future emigrants will find it an extremely useful portal to provide the tools necessary to navigate the often challenging experience of emigration,” the Minister added.

The site was developed following extensive consultation with 500 recent emigrants who left to find work abroad and who were surveyed about how they are coping emotionally with their new lives.

The site, www.mindhowyougo.ie, was funded by the Department of Foreign Affairs Emigrant support Programme and developed by Crosscare’s Migrant Project, one of the programmes of the social support agency of the Archdiocese of Dublin.

The young men and women who took part in the survey were asked for a range of feedback on how prepared they were before they left, how their expectations changed when they arrived, and how they coped with the emotional upheaval of leaving.

With guarantees of anonymity, the honest responses paint a picture of sadness and longing for home that Skype and social media have not been able to overcome. 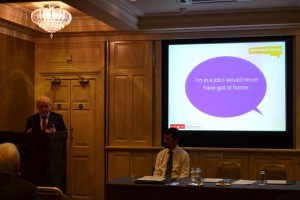 The majority, 71%, said they experienced homesickness regularly and 64% stated that the experience was harder than they expected

For over half (52%) the participants available emotional support abroad was worse compared to when they were in Ireland.

Missing family, friends and home was the most commonly cited challenge along with employment related issues and difficulty making friends.

The website charts seven different stages of emigration and gives anyone planning to leave honest, realistic accounts of what to consider before making up your mind, before you go and when you arrive.

Among the very personal experiences outlined by those who have gone before were:

“Spend time with family and friends; tell those who you love that you love them. Take time to say goodbye to everyone you care about, try your best to leave on a good note with everyone.”

On a more practical note, one person advised;

“Set up Viber and skype accounts before you go, especially for your parents. Write their usernames and passwords down so they don’t forget them”

“Plan trips home so you have something to look forward to”

Many emigrants advised others to avoid leaving by themselves and to try and go with a group or at least one other person to have some support and back up for the challenges that lay ahead.

Others said to manage expectations, finding the right job or a new dream home didn’t happen for everyone.

On a positive note, many recorded their happiness at meeting many new people, and welcomed the bond shared by emigrants abroad.

From a career perspective many others spoke of how they were in challenging and rewarding jobs that they could not have found at home.

Being away from Ireland’s “binge drinking culture” was noted by one respondent while another observed the benefits of realising “Ireland isn’t at the centre of the Universe!”

Among the biggest challenges outlined by emigrants, were long hours and low pay, being over qualified for work available and missing special family occasions at home like birthdays and weddings.

Irish Abroad Networking Officer with Crosscare Migrant Project, Joe O’Brien said at the launch that “the value that this website brings is the accumulated wisdom of 500 recent Irish emigrants.”

“There is really good and practical advice about what to do before you go and after you arrive that every intending emigrant should look at. For those already abroad we would recommend looking at the section on homesickness.”

He added that homesickness could be dismissed as ‘just a natural reaction’ “but we do urge emigrants to give special attention to their emotional and mental health while abroad and take on board some of the advice of their peers.”

Key points from the website/survey

49% of participants were living in Australia with 17% each in the UK and Canada.

51% said their available emotional support was worse compared to when they were in Ireland.

The advice provided by Irish emigrants is structured under 7 main headings in the website www.mindhowyougo.ie :

Participants recommended research and networking prior to departure. Bringing adequate funds was also raised along with preparing for adversity & managing expectations. Other recommendations prior to departure included going with people you know, pre-arranging employment & accommodation, spending time with family and friends before departure and ensuring good IT access.

There were three main recommendations for those who have just arrived:

Virtually everyone’s expectations changed in the first month after arrival. Those who found it tougher than expected mentioned the difficulty in finding work, adapting to a new environment and meeting people. Other unexpected challenges included loneliness & homesickness, greater financial strain than expected and occasional racism.

Participants mentioned numerous positive experiences during their time abroad which can be categorised as follows:

The most challenging experiences classified in order of size included:

People spoke about the various things that triggered homesickness for them but they also detailed the ways in which they cope with racism including contact with family and friends, personal/internal processes and keeping busy.

Finally, participants mention the importance of talking to someone and making friends, positive thinking and managing expectations and exercising caution on the use of alcohol.