Home > News > First ever World Day Against Trafficking in Persons

First ever World Day Against Trafficking in Persons 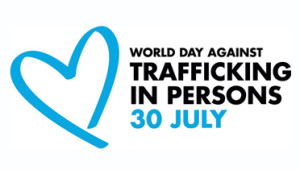 The first ever World Day against Trafficking in Persons was marked on Wednesday with a call to action to step up the fight and support the survivors of this modern form of slavery.

An estimated 2.5 million people are trapped in forced labour, commercial sexual exploitation or sexual slavery, having been targeted by traffickers.

Yesterday marked the first annual UN Day Against Trafficking in Persons for which a campaign was launched with the hashtag #Igivehope.

In a statement, the UN Secretary-General Ban Ki-moon warned that “To stop the traffickers, we must sever funding pipelines and seize assets.”

He urged all countries to ratify and fully implement the UN Convention against Transnational Organised Crime and its Protocol on Trafficking in Persons.

On Tuesday, the Vatican’s Pontifical Academy of Sciences, together with the US Embassy to the Holy See and the ecumenical Global Freedom Network, hosted a video conference with America’s top official on monitoring human trafficking, Ambassador Luis CdeBaca.

Speaking from Washington, Ambassador CdeBaca talked about the recently released US Report on Trafficking in Persons, highlighting the journey that trafficked people make from victim to survivor.

Tracking progress being made in 188 countries around the world, the report focuses on ‘prevention, protection and prosecution’.

Ambassador CdeBaca stressed the important role the Church has played in defining trafficking as a crime against humanity, pushing it higher up the public agenda.

“My biggest concern is that as a global community we tend to chase the last tragedy.”

“So last year we were suddenly all concerned about fire safety in Bangladeshi garment factories…..so instead of dealing with the labour recruiters that are feeding people into these factories, or the retailers, asking why they let this slavery happen…we’re concerned about getting fire extinguishers in the factories.”

“A little bit of change happens but not enough systemic change to bring us closer to our goal,” the Ambassador warned.