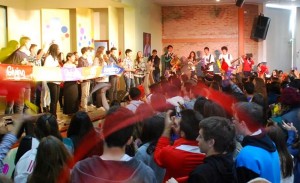 Irish teenagers who returned from the World Person Project in Argentina are convinced that it is possible to build a world of peace and understanding.

“If everyone could experience the atmosphere that we had together at the World Person Project in Argentina, a united world , undoubtedly – would be realised,” commented 17 year old Conleth Burns from Antrim.

Conleth was one of a group of 20 Irish teenagers who travelled to O’Higgins, north of Buenos Aires, for the seven day World Person Project camp, joining 530 young people from 21 nations. (see https://www.catholicireland.net/irish-teens-part-world-citizens-camp-argentina/)

For the first of Phase of the World Person Project (Hombre Mundo) the young people shared, laughed, talked and thought together about the challenge to “hold in our hearts the treasures offered by all the continents, and know how to share our own treasures.”

Through workshops, talks and international Expos of Culture, the teenagers learnt about each other’s cultures, but it was the deep sharing of personal experiences and scores of interactions which truly bonded those present.

Vero –a young person from Paraguay discovered that: “Everyone can smile in the same language.”

“Thanks guys for showing us adults that another world is possible!,” said psychologist Arturo Claria “Thanks for showing that there is one language that binds [people] beyond cultures, differences, languages and needs no translation: LOVE!”

During a two hour show at the end of the week which was streamed live to tens of thousands of people all over the world, the Irish group performed an Irish dance.

The teenagers, who have since returned to Ireland, said however the true purpose of the time in Argentina was to energise them for the work they did during the second week when they visited and worked on various Focolare sponsored projects in Paraguay. 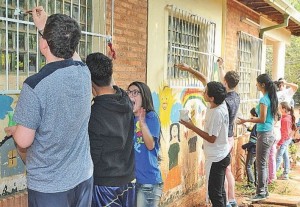 At Lambare, the group together with locals helped to brighten up a school painting walls and gardening. Everyone contributed to a permanent mural in the school. “That day was also the chance to greet the people of Luque – the elderly people in the St. Francis of Assisi Nursing Home,” recalls Conleth. “I was speaking with a man, who only spoke Guarani (the native language of Paraguay). I hadn’t a word, but yet I could communicate with him; not in words, but in presence. At this moment I knew; to be is much more important than to do.”

The next day the group went to the community of San Miguel. Over 20 years ago, the Focolare was asked to help a group of people living in terrible poverty on a rubbish dump that had been flooded. They were homeless and desolate but over time a clinic, a school and a library was born. Twenty families moved to San Miguel and the community grew stronger.

The Irish and Paraguayan teenagers who had been at the World Person Project, helped clean up an area of the San Miguel. “I felt privileged to see people who had nothing and didn’t complain at all, they just got on with life,” commented Cathal Milner (17) from County Tipperary. “It was a wake-up call for everyone.”

The Irish group then travelled across Paraguay to the city of Caazapá where they visited a community living in severe poverty. Together with the scouts, they distributed food bags, presents and some hot drinks and food. But more than that, they played with the children, did some Irish dances, Irish songs and games. 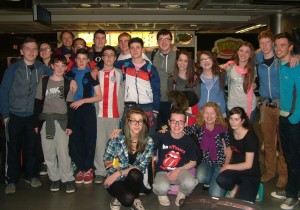 Irish Youth for Unity in Dublin airport on return from World Citizen Project in Argentina.

The last stop on the trip was to a small children’s care home where the group played with the children and gave them simple presents. “I was surprised by the way the children acted towards us,” said Siobhán Ní Ghuairim (16) from Limerick. “They were happy with what little they have. We are unhappy with everything we have. It is an eye opener.”

Arguably, the most important phase of the project – Phase 3 lies ahead, says Conleth. The chance to continually realise this ‘World Person,’ to live what we promised in Argentina: “As World Persons to build a just, fraternal and peaceful future for everyone.”