Home > Featured > “Women do now walk the corridors of the Vatican”

“Women do now walk the corridors of the Vatican” 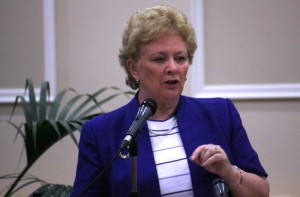 “Things are changing” in the Church and “women do now walk the corridors of the Vatican” and are listened to, Baroness Nuala O’Loan said in her keynote address at the conference ‘Women and the Catholic Church’.

Speaking at University Church, St Stephen’s Green, Dublin at an event organised by the Notre Dame-Newman Centre for Faith and Reason, the Catholic peer noted that Pope Francis had appointed three women as consultors to the CDF in April.

“We hear it said that women are second class citizens in this Church of ours, we hear that women have no role in church decision-making and no capacity to influence change; there is some truth in that argument, but it is far from the whole truth,” she said.

However, Baroness O’Loan underlined that “much remains to be done”.

“There is something in the culture of our Church which is unhealthy, there is something that needs to change fundamentally if we are to be the Church that Christ intended us to be,” she told the conference delegates on Friday evening.

It was true that those who lead the Church in terms of having the right to make decisions did so by virtue of ordination, and it was also true that as recently as June this year Pope Francis reaffirmed the Church’s traditional teaching against women’s ordination.

“Even though the Pope spoke as he did, there is change afoot,” the former Police Ombudsman for Northern Ireland said.

She highlighted how in 2016 Pope Francis had established a commission to study the issue of women deacons and included women on that commission.

The mother of five and member of the House of Lords also highlighted Austrian prelate Cardinal Christoph Schönborn’s response in April to a question on the ordination of women, which he said was an issue that could only be clarified by a church council and could not be decided by the Pope alone.

But she also stressed that there are other possibilities for women in the Church outside of ordination.

Of the “visual portrayal of the place and contribution of women in the Church today”, Nuala O’Loan said she didn’t think there was an awareness of how to manage the optics, and the sight of male-only panels at the recent synod was an example of this.

She urged lay women and lay men to work with the ordained to create lay prophetic governance in the Church, which was also in need of transparency and accountability.

However, she also acknowledged that while the Church “is not perfect”, the Church of today is “unrecognisable” from the Church in which she grew up. “I think it will continue to change and to grow.”

At the same conference, Sr Sara Butler, Consultant to the US Bishops’ Doctrine Commission, spoke on the topic ‘Women’s Ordination: The Case Against’.

In her address she said it was important to discover and name the contribution women make to the Church’s ministry and mission.

There were many women disciples – Mary Magdalene and the other women of Galilee – who collaborated with Jesus and accompanied him, along with the Twelve, during his Galilean ministry and stayed with him during his passion, death and resurrection.

However, according to Sr Sara, Jesus’ example of calling men only cannot be dismissed as irrelevant without calling into question his intention to establish a New Testament priesthood.

She said the place of the Twelve in the Church’s ministry and constitution is gaining renewed attention from partners in the ecumenical dialogue “as they confront differences over women’s ordination”.