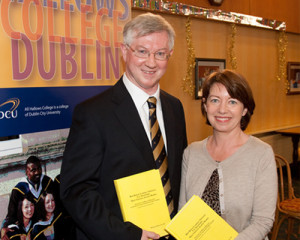 Speculation has continued to mount that an Irish theologian may be one of the first women appointed a cardinal if Pope Francis decides to relax canon law and implement radical changes on who can qualify for rank.

Reports in a number of Sunday papers suggested that TCD Professor of Ecumenics, Linda Hogan, who is also Vice Provost of the College, would be a likely contender but a number of other high profile women have also been mentioned.

A spokesman for the Association of Catholic Priests in Ireland said the group was “delighted” that the possibility of “giving women a more significant role in the life of the church” might be on the cards.

Fr Tony Flannery of the ACP told CatholicIreland.net that they would like to see women head up a number of Vatican congregations as part of Pope Francis’ reform of the Church.

The media speculation came about following a listing by Fr James Keenan, the Professor of Moral Theology at Boston College, of his top nominees of possible woman cardinal candidates on his Facebook page.

Fr James Keenan also included Holy Child Jesus Sr Teresa Okure, a theology professor at the Catholic Institute of West Africa in Nigeria and Maryanne Loughry, the associate director of the Jesuit Refugee Service in Australia on his list of nominees. Two of his candidates are from Brazil, three are African, one is Australian, one is German and another is Filipino.

A spokeswoman for Professor Hogan said she would not be commenting on the matter, while a spokesman for the Irish Bishops said he had no information about it and therefore could not comment.

A feminist, Professor Hogan’s other areas of speciality include Ethics in International Affairs and Human Rights. She was formerly a member of the Irish Council for Bioethics.

However, according to Fr Tony Flannery, there are “many fine women who would make an enormous contribution” to the Church and he said it would be great to have a woman in the next conclave choosing the next pope.

The “most obvious person would be our ex president, Mary McAleese” who is a canon lawyer and is currently a visiting scholar at Boston College.

Last week, Mary McAleese told the US publication, the Worcester Telegram & Gazette, that there needed to be more power-sharing with women in the Catholic Church. “It’s deeply offensive that they are not included in the decision-making process,” she said.

A canonical provision dating from 1917 prohibits the unordained being appointed as cardinals and its existence has led some in the Church to believe the possibility of a woman ever becoming a cardinal is unlikely.

However, the ACP believes this provision can be changed easily as the prohibition is not fundamental church dogma but a church rule.

“We understand that there is no doctrinal reason as to why it might not happen. Lay people have been cardinals in the past,” Fr Flannery said.

“Pope Francis has talked many times in the last few months about giving women a more significant role in the life of the church.”

“At this stage almost anything is possible if you can judge by the things he is saying. So I wouldn’t rule it out but it is a long shot. It is probably less likely than more likely,” he said.

Appointing women as cardinals would be “a very sensible way of going about giving women a bigger role in the church” and “less controversial” than ordination.

The ACP spokesman said there were a number of areas in the Church where women as cardinals could have an important impact, and he suggested justice and peace as well as handling clerical abuse as the two most obvious areas.

“It doesn’t really matter what the areas are, it would just be important to have them in the Vatican within the curia and heading up congregations. It would be an enormously significant message for the whole Church,” he said.

Last year, Cardinal Timothy Dolan of New York, who is president of the US Conference of Catholic Bishops, when asked during a television interview whether a woman could be a cardinal, stated that it was “theoretically” possible.

“You know, in fact, get this, and I’ve heard it from more than one person, that one time somebody said to Blessed John Paul II, ‘You should make Mother Teresa of Calcutta a cardinal.’ And the Pope said, ‘I asked her. She doesn’t want to be one,’” he related.