Home > News > “While the war is over, the conflict is alive and well”

“While the war is over, the conflict is alive and well” 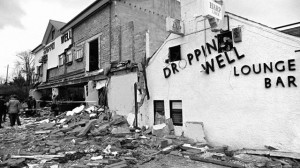 “While the war is over, the conflict is alive and well …” Bishop Donal McKeown of Derry warned on Tuesday at a memorial service for those who died in the 1982 explosion at the Droppin’ Well disco, Ballykelly, Co Derry.

In his homily, the bishop warned that in this, the decade of centenaries, “We will hear many calls to commemorate heroic resistance or generous sacrifice.”

Acknowledging that it is important to remember those whose lives and life chances were snuffed out by the brutality of others, Dr McKeown added that any Christian religious service can never be about “promoting a selective, myopic recalling of the past, allowing ourselves to be used to serve other current political or personal agendas”.

He said how we remember events is a significant factor in how we help our younger people envision the future.

“In our still contested political space, commemorations like this can be not so much sentimental as seminal,” the bishop said.

He told those attending the memorial that the stories that we tell about the past in this country “have tended to be characterised by tales of victimhood and heroic resistance”.

“Can we tell a story about Ballykelly and about the events that preceded and followed it, which highlights the heroism of the many and refuses to see only the devastation caused by the few?”

He also asked if a narrative about Ballykelly could be avoided that would make it an excuse for some to visit violence on others?

“Can we remember the faces of the dead in a way that brings us peace and not turmoil, that reminds us of the horrible waste of life and resources that is any armed conflict and inspires us to be architects of peaceful ways of resolving problems.”

He said he doubted that the 17 people killed in the Droppin’ Well would want to be recalled in a way that perpetuates hatred or bitterness. “That would mean that neither they nor we could be at peace,” Bishop McKeown suggested.

Elsewhere the bishop said, “The problem for our politicians is not so much that they can’t agree on a new economic strategy. The real core problem is that they are still fighting over which narrative about the past will obtain supremacy. History is told by the victor.”

While the war is over, the conflict is alive and well he observed but added that because of the victory of Jesus we do not need to be victorious, only to speak the truth for it is that alone that will set us free.