Westminster vote tomorrow could be hijacked, warns Archbishop of Armagh 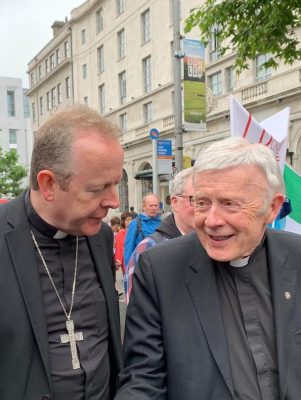 The Primate of all-Ireland and other members of the Catholic hierarchy joined thousands of people who took part in the Rally for Life in Dublin yesterday.

Archbishop Martin said he was present to stand in solidarity with the many people in Ireland who firmly believe that pregnancy involves two lives – the life of the mother and that of her unborn child.

“Both [are] in need of love, respect and protection,” the Archbishop said.

“I march today because I believe it remains as important as ever to affirm the sanctity of all human life,” he told the media covering the rally on Customs House Quay.

“The direct and intentional taking of the life of any innocent human being is always gravely wrong – we must avoid becoming desensitised to the value of every human life.”

Archbishop Martin reiterated his call for more help for “vulnerable women” who feel that their only way out of crisis is to end the life of their unborn child.

“What new supports have we put in place for mothers and fathers at the point of crisis? And what supports are we offering to parents who feel that they have made the wrong choice in having an abortion?”

Turning his attention to developments in the six counties, Archbishop Martin said he was concerned by suggestions that amendments are being considered to the Northern Ireland (Executive Formation) Bill, going through Westminster on Monday next.

“[These] will hijack this Bill to remove existing legal protection for unborn babies and to fast track the legalisation of abortion on demand in Northern Ireland. How tragic it is for humanity that some legislators would fast track the ending of the lives of the most defenceless in our society.”

The Archbishop identified himself as one of the many people who believe that there is an urgent need to restore the Northern Ireland Executive. But he added: “There is something particularly cynical, however, in taking advantage of the present political crisis to remove the right to life of the most vulnerable of our people – the unborn baby. The common good cannot be served in this way.”

Archbishop Martin concluded his remarks by calling on Catholics in Northern Ireland to contact Members of Parliament as a matter of urgency, requesting that he or she vote against any attempt to remove legal protection from unborn babies.