Home > News > “We have used too much and preserved too little”

“We have used too much and preserved too little” 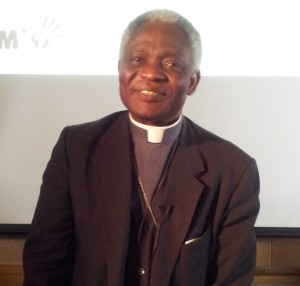 “We clearly need a fundamental change of course to protect the earth and its people,” the President of the Pontifical Council for Justice and Peace told at the General Assembly for Caritas Internationalis on Thursday.

This, in turn, would allow us to ‘dignify humanity’, Cardinal Peter Turkson said.

The Cardinal warned that humanity is facing far reaching changes especially in regard to climate change and human development.

He acknowledged that although humanity has made great progress, especially in the past two centuries, this progress “has its dark sides and unacceptable costs.”

He pointed out that although the world produces more than enough food for everyone, hundreds of millions of people still go hungry. Caritas’ campaign ‘One Human Family: Food for All’, he said seeks to address that challenge.

The President of the Pontifical Council for Justice and Peace said the same attitudes of indifference to humanity also affect how we treat the natural world.

Human beings are part of nature, but too often we have “traversed the planet’s most fundamental natural boundaries” leading to a disruption of the earth’s ecological balance, and threatening the earth with “great ruin.”

Cardinal Turkson warned that climate related disasters threaten both “poor countries and those at the heart of the modern economy” – although the consequences are much more serious for poorer countries.

The solutions, he suggested, must be based on several fundamental principles. “All human beings are made in the image and likeness of God, and so we must treat one another as brothers and sisters, basing our relationships on respect, reconciliation, and solidarity.”

We must also recognise “that everything God has created is good, precious, and valuable… and thus, the correct response to receiving such a magnificent gift is surely one of gratitude, love, and respect.”

For this reason, he said, we have a “sacred duty” to care for the earth, and to ensure that we will hand this gift down to our children.

Cardinal Turkson said we can and should use the gifts of the earth, but the current model is “out of balance.” We have used too much, and preserved too little.

In the concluding portion of his address, the Cardinal said any attempts to find solutions must be grounded on a firm moral foundation.

“Without moral conversion and change of hearts, even good regulations, policies, and targets in the world are unlikely to prove effective. Without this ethical foundation, humanity will lack the courage, the moral substance, to carry out even the most sensible policy proposals.”

Separately, Cardinal Luis Antonio Tagle of the Philippines has been elected as the new president of Caritas Internationalis.

He was nominated at the confederation’s 20th General Assembly in Rome.

Cardinal Tagle is the first Caritas Internationalis President to be elected from Asia and was congratuted by the outgoing President Oscar Rodriguez Maradiaga.