“This is a watershed moment in Irish society” – Bishop Crean 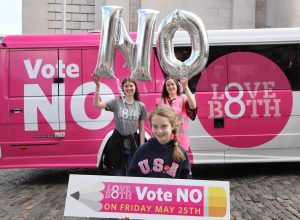 The LoveBoth Vote No Tour set off from Dublin on Saturday (5.5.2018)on the first leg of its tour around the country. A team of LoveBoth volunteers boarded the bus at City Hall before leaving the city for the tour’s first stops in Mullingar, Carrick-on Shannon and Sligo. Pic shows Clare Aherne (8), Katie Fillion and Annette O’Donnell at City Hall. Photo: John Mc Elroy.

Bishop William Crean of Cloyne has warned that the referendum on the Eighth Amendment on 25 May is “a watershed moment” for Irish society.

In a pastoral letter read out in the parishes of his diocese over the weekend, Bishop Crean reminded the faithful that the right to life, from its beginning to its natural end, is the cornerstone of a civilised society.

In all, seven bishops issued pastoral letters on the Eighth Amendment over the bank holiday weekend in a bid to influence more people to vote No in the upcoming referendum.

In his letter to his flock, Bishop Crean stressed that the decision Irish society was facing was one of conscience.

“This entails taking time and effort to ensure that our conscience is properly informed. In the absence of this process we risk arriving at a decision that is superficial and poorly grounded.”

He said many people of faith and practice who are personally pro-life, feel they do not wish to stand in the way of those who believe that abortion is morally acceptable.

“On what grounds can one justify collusion with actions that you find morally repugnant?” he challenged.

In a nod to the large number of ‘undecideds’, he acknowledged that it was easy to be confused.

“We must not be naïve about what is at issue in this referendum. It is a great struggle between light and dark, between life and death,” he said and added, “We must be alert to the dark forces that hide their true intent. While we respect those who differ from us, we also know that in our midst there are wolves masquerading as sheep. The art of spin is common practice. We need to be alert to subtleties that seek to take us down side-tracks.”

Dr Crean also hit out at the “array of groups dedicated to the provision of an unrestricted regime of abortion” which are “hugely powerful and well-funded”.

He said it was “mind-boggling” to see the United Nations promoting abortion as a human right.

“Do we wish to create a society whereby we are desensitised to the destruction of the unborn? When something is legalised, in the eyes of many, it is morally acceptable? When we lose sensitivity to care for the unborn we risk becoming equally insensitive to the frail and elderly.”

The Bishop of Cloyne also challenged the Citizens’ Assembly and its final report which, he said, in recommending legal access to abortion up until “an extraordinary late point in the pregnancy” had “left many people aghast” at its conclusions and led many “to question its representative nature”.

Separately, in the Diocese of Ossory, Bishop Dermot Farrell said, “We must all remain acutely aware of the difficulties many women go through during pregnancy.”

In his pastoral statement, Bishop Farrell said the real issue “is not the difficult and stressful pregnancies so often cited in debate, but whether we want to strip the unborn defenceless child forever of the right to life”.

“The law and the teaching of the Church have always found a way, with compassion, to deal with the hard cases,” he stated.

Elsewhere in his pastoral letter, Dr Farrell said that experience had shown that once abortion was introduced it has proved extremely difficult to restrict.

“Laws do not remain static. Moreover, abortion becomes normalised. For example, in England about 40% are repeat abortions.”

He challenged men who father a child but are unwilling to accept responsibility for the child. In abandoning the mother of his child during pregnancy, a man “indirectly encourages the woman to seek an abortion,” he said.

Dr Farrell cited St Pope John Paul II who said that by leaving the woman alone to face the problems of pregnancy, a man indirectly encourages such a decision on the woman’s part to abort (cf par 14, The Dignity of Women).

On Wednesday, it will visit Roscommon (12pm) and Galway (4pm).