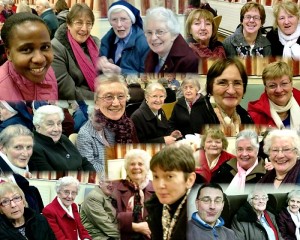 A Church without a vibrant religious life would be an impoverished Church, Archbishop Diarmuid Martin of Dublin warned on Vocations Sunday.

The Archbishop said he was convinced that there are many young women in today’s Ireland who would be attracted to new forms of association with religious life, where they would dedicate part of their life to attaining deeper holiness through prayer, community and service to the poor.

At a Mass in the Church of the Holy Family on Aughrim Street in Dublin to give thanks for the declaration of Mary Aikenhead as Venerable, he suggested, “Religious are called in today’s world not so much to be leaders in doing things themselves, but in being catalysts for new forms of engaging young men and women in radical commitment to the life of the Church, not necessarily for their entire life.”

He also challenged the Congregation of the Religious Sisters of Charity which Venerable Mary Aikenhead founded, asking them: “Quo vadis? Where are you going? Can we celebrate the past without first of all generating renewed confidence and hope for the future?”

Describing Mary Aikenhead as a woman of innovation, the Primate of Ireland said she refused to be enclosed by either the physical or psychological walls she encountered in other congregations.

“The congregation needs to renew that spirit of simple innovation, not looking for great revolutions, but never being trapped in the past,” Archbishop Martin said and he recalled a phrase of Henry Kissinger, who said in a different context: “repeating the things and the initiatives of the past only leads to stagnation”.

Speaking on Vocations Sunday, Archbishop Martin said, “With all due respect to tradition, for many generations too many novice masters and novice mistresses and deans of formation in seminaries became “heralds and custodians of the past and of conformity rather than of the creative innovation of the spirit”.

He underlined that Mary Aikenhead’s understanding of religious life was innovative.

Encouraged by Archbishop Daniel Murray in the 19th century, the Congregation she founded was established under pontifical right and was not placed under the direct control of the individual bishops, “something which most bishops did not like”.

“She was encouraged you might say to shop around and find the form of spirituality most suited to her work with the poor, for example through training and friendship with the Sisters of Mary Ward and the guidance of Jesuit spirituality,” he explained.

Addressing her followers in the Religious Sisters of Charity, he said they were celebrating the memory of Mary Aikenhead and her charism and committing themselves to finding “creative ways for that charism to flourish in the future for the good of the Church and of our society and especially the hopes and aspirations of brothers and sisters trapped in poverty”.

Separately, Bishop Denis Brennan of Ferns in his homily for Vocations Sunday Mass, which was televised on RTE Television, paid tribute to the many priests who day in and day out all over Ireland fulfil their calling.

“In this Year of Consecrated Life I would also like to affirm our Religious brothers and sisters. Your commitment, enthusiasm and dedication are a matter of record, people know and appreciate what you have done and continue to do. I thank you for your presence and for your witness,” the Bishop of Ferns said.

He added that at times people take the Religious for granted, and that they would only be fully appreciated in retrospect.

Bishop Brennan who is chair of the bishops Council for Vocations said the Pope had asked the faithful to do three things in this Year of Consecrated Life:
•         To look to the past with gratitude.
•         To live in the present with enthusiasm.
•         To embrace the future with hope.

He said looking to the past should not be, in the words of the Pope, “an exercise in archaeology”.

Rather it ought to offer people an opportunity to give thanks for a journey which for all its lights and shadows, has been a time of grace, marked by the presence of the spirit.

He also reminded them that Pope Francis had asked the Religious to embrace the future with hope, whatever that future may hold or mean.

This is the hope which does not disappoint, it is not based on statistics or accomplishments but on the One for whom “nothing is impossible.”

“A vocation is fundamentally an affair of the heart and to anyone discerning a vocation at this time, I would like to offer the words of the late Steve Jobs, who when speaking in 2005 to young people graduating from Stanford University in the United States said: ‘Your time is limited, don’t waste it living someone else’s dream, follow your heart.’”