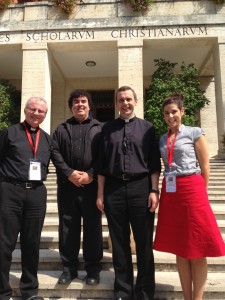 The thousands of future priests and religious in Rome for the procession hailed from 66 different countries.

The theme of the pilgrimage was ‘I trust in you’ which according to Ann-Marie Gallagher relates to the act of trust through which people find the strength and courage to consecrate themselves to God in the priestly or religious life.

The pilgrimage concluded with Mass with Pope Francis in St Peter’s Basilica.

“Pope Francis told us that vocations come from prayer because it is God who chooses his disciples, not advertising campaigns or appeals of service and generosity,” Ann-Marie Gallagher of Vocations Ireland said.

The pilgrimage was one of the events organised by the Pontifical Council for the New Evangelisation to mark the Year of Faith.

The European Vocations Service Conference discussed vocation to priesthood in the light of the document issued by the Congregation for Catholic Education – ‘Pastoral Guidelines for the promotion of vocations to the ministerial priesthood.’

Bishop Oscar Cantoni of Crema opened the conference and Cardinal Mauro Piacenza, Prefect of the Congregation for the Clergy, was one of the speakers to address the conference.

Speaking on her return to Ireland, Ann-Marie Gallagher said, “It is the responsibility of the whole Church to create a culture of vocation, in which every person is helped to recognise their call from God.”

She said this “goes hand in hand with the gift of life itself.”

“This culture of vocation is the foundation upon which it is possible to invite people to consider specific vocations such as priesthood, religious life, Christian marriage, and other forms of special consecration,” Ms Gallagher added.