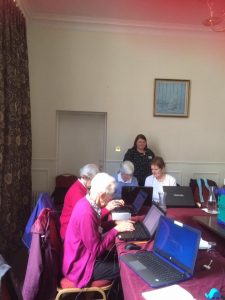 At the Social Media Makeover Day in Cork

Irish religion teachers are to be offered vocations training.

Next February, in a special workshop organised by Vocations Ireland, members of religious communities will share about their vocation journey in a bid to help teachers to better understand and pass on the concept of vocation to their students.

The teachers will be given practical resources to help them in class and details of a liaison person they can contact for more help when required.

“We are also open to helping out during in-service days with this topic,” Margaret Cartwright, Director of Vocations Ireland told Catholicireland.net.

Over the next 12 months, Vocations Ireland will also provide training for other trainers or spiritual leaders.

Margaret Cartwright explained that these events are aimed at “assisting vocation directors with training in the use of social media, liturgy [and] spiritual accompaniment for young adults.”

An Irish team, including a vocations director, young person and communications expert, has already been to the United States earlier in the year on a course on vocations and social media such as Facebook, Twitter and Instagram.

“We are refocusing our way of communicating with young people,” she explained.

A ‘Social Media Makeover Day’ was held in Cork on 16 October. Similar days are expected to be held in other parts of Ireland in coming months.

It was aimed at “getting the Good News out there on Facebook,” according to Alan Neville, director of Vocations, Missionaries of the Sacred Heart (MSC), who posted a video he prepared during the day on the MSC vocations website.

Present with him on the course were members of the Presentation family, Poor Clare Sisters, a Columban father, a Good Shepherd, an Ursuline and some lay people.

The event was part of a Vocations Ireland/NRVC (the American-based National Religious Vocation Conference) Ambassador Programme. The latter is funded by the Conrad N. Hilton Foundation, which in January 2016 announced it was giving Vocations Ireland grants worth €268,000 to help build capacity to support and nurture vocations to the consecrated religious life in Ireland today.

“It [the grant] is spread over three years. This first year we are spending on promotional material because we moved office,” said Margaret Cartwright. Leaflets with the new address have been prepared, along with a new website, but training is also underway.

“We’ve been working with vocations directors to up-skill them,” said Margaret Cartwright. She added that programmes with young people on discernment continue as usual. “So it is a twin-pronged approach. Next year we will work with families.”

Next Tuesday (25 October), the Sharing the Call Towards Ministry to Others series of seven evening sessions will begin. For young people aged between 18 and 30, these are an opportunity to hear the stories of the religious men and women through film, music and drama.

The sessions at St Paul’s, Arran Quay, Dublin will include the Carmelites, Franciscans, Vincentians and Religious Sisters of Charity, and there will be a session on priesthood with Fr Willie Purcell.

The now annual Explore A Way weekends for those who have already begun their journey of discernment will be held each month from November to March at the Focolare Centre, Prosperous, Co Kildare (dates to be confirmed).

Samuel Groups will also shortly begin. They are for single young adults between the ages of 18 and 35, and are aimed at helping them to discern their direction in life, be it marriage, single life, priesthood or religious life.

The ‘Sisters’ Café’ events will also return, possibly in Maynooth. These involve young people gathering in a café setting with sisters from different congregations. They each speak for a short period and then circulate from table to table (not unlike speed dating) so the attendees can ask questions, chat and share stories more informally over a cup of tea.