Real vocation of grandparent is to pass on the faith 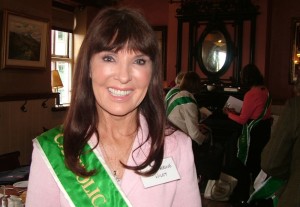 The real vocation of a grandparent is to pass on the faith, says Catherine Wiley, founder of the Catholic Grandparents Association. “My mother had a great saying ‘You have a job to do until you have the last breath in your body’. So I say, with my last breath, please God, I’ll be passing on the faith.”

Speaking to CatholicIreland in advance of a grandparent’s pilgrimage to the Marian Shrine of Walsingham, Norfolk, today (feast of the grandparents of Jesus Sts Anna and Joachim), the Irish woman said that as Catholic grandparents “our responsibility and our great joy is to pass on our faith”.

Ms Wiley said that grandparents do this by being themselves. “A loving grandparent can do just about anything.”

The grandmother of ten says grandparents don’t need to be theologians to pass on the faith. “There is not a grandparent alive who doesn’t know how to read a Bible story, who can’t explain the Mass to a child, who can’t tell them about the Trinity or that the Pope is our leader on earth.”

Ms Wiley, who founded the Catholic Grandparents Association in 2008, said there was a difference between a parent’s love and a grandparent’s love. “When you are a parent, you have a different agenda. When I was a parent I wanted different things for my children. I wanted a good education, I wanted them to make wonderful marriages. The faith wasn’t the most important thing in my mind.”

By contrast she said, grandparents had no agenda. “They genuinely just want the best for their grandchildren. They want them to be good moral human beings, to know the difference between right and wrong and that there is a loving, forgiving God waiting for them when they go astray, because we all go astray.” 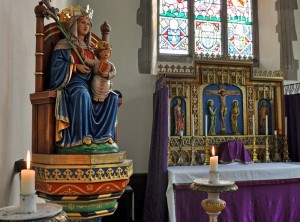 Catherine had her first intuition of the vocation of grandparents at the Marian Shrine of Walsingham in England in 2002. “I was there on Our Lady’s birthday, and I wondered what I could give Our Lady as a birthday present.” She thought a grandparents pilgrimage to honour Sts Anna and Joachim at the shrine would delight Our Lady. “And very quickly came the thought that we could honour all grandparents for all they had done for us.”

The first grandparents pilgrimage to Walsingham took place in 2002 and it has continued ever since on the feast of Sts Anna and Joachim, 26th July. Around 200 people took part last year. Caroline O’Grady from the Catholic Grandparents Association (CGA) said “weather permitting” they are hoping for “twice that number” this year. “We have buses coming from Scotland, Westminster and even a group coming from Ireland,” she told catholicIreland.

This year’s Walsingham pilgrimage will be led by Mgr Carlos Simon Vasquez, the Undersecretary of the Vatican’s Pontifical Council for the Family. It is Mgr Vasquez first time to visit the shrine. A first class relic of St John Paul II will be carried as part of the entrance procession. The main celebrant of the mass will be Bishop Alan Peter Doyle from Northampton, who is patron of CGA. The pilgrimage, which will also be addressed by Catherine Wiley, will conclude with the Story of Walsingham, an ecumenical play performed by the local children, will be performed at 5pm.