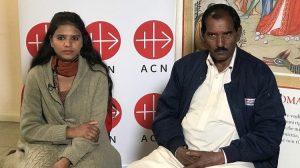 A special sitting of Pakistan’s Supreme Court has reached a verdict in an appeal by Christian woman, Asia Bibi, who was sentenced to hang in 2010 for blasphemy.

However, the three judges announced on Monday that they were deferring publishing the outcome until next week.

Aasiya Noreen ‘Asia’ Bibi is a mother-of-five from Ittan Wali, a small rural village in central Pakistan. Christians make up less than 2 per cent of the population.

She has been held in solitary confinement since November 2010, when she was convicted of blasphemy by a Pakistani court and sentenced to death by hanging.

According to the ACLJ, if Asia Bibi’s appeal is rejected, “her options look grim”, as only Pakistan’s president will be able to spare her life.

Bibi and her supporters maintain her innocence and insist the charge of blasphemy was trumped up in a personal dispute.

While the Vatican has called for her release, successive appeals have been rejected.

If the Supreme Court bench upholds Bibi’s conviction, her only recourse will be a direct appeal to the president for clemency.

If that fails, the 47-year-old could become the first person in Pakistan to be executed for blasphemy.

Asia Bibi was convicted of blasphemy against the Prophet Muhammad after she drank water from a well as she worked on a farm. A Muslim co-worker believed Asia had made the water ceremonially unclean by drinking from the same cup and a row erupted between the two.

The incident occurred in June 2009.

According to Bibi’s account, after taking a drink from a well, one of the women turned to the other women working in the fields and said, “This Christian has dirtied the water in the well by drinking from our cup and dipping it back several times. Now the water is unclean and we can’t drink it! Because of her!”

The argument intensified, with the women calling on Bibi to convert and “redeem herself”.

Bibi responded, “What did your Prophet Mohammed ever do to save mankind?”

The woman complained against Bibi to a local imam.

Bibi’s daughter, Eisham Ashiq, told CNS that, as a 9-year-old girl, she witnessed her mother being severely beaten by a Muslim mob in the aftermath of the accusation.

Speaking to CNS on Monday, Eisham Ashiq said, “I believe in God and I believe she will be released, but she can’t live in Pakistan once she has been released – simple as that.”

Last Friday, Ashiq Masih, Asia Bibi’s husband, told CNS that if Bibi is released she and her family will immediately seek sanctuary in one of several countries that have offered them exile, because it was too dangerous for them to remain in Pakistan.

Ashiq Masih, a builder from Sheikhupura, is currently in England with his youngest daughter, Eisham Ashiq (18) as guests of Aid to the Church in Need, a Catholic charity helping persecuted Christians.

They said that when they visited Bibi in Multan Prison on 1 October she was in good health, contrary to speculation that she was developing dementia.

According to CNS, Bibi’s case has divided Pakistan, with millions of Islamic militants reportedly willing to kill her to obtain a reward of 500,000 rupees offered by a Muslim cleric for her murder.

Among those who called for her release was the governor of Punjab, Salmaan Taseer, who was assassinated in January 2011 after he said he would fight for her freedom.

Two months later, Minority Affairs Minister Shahbaz Bhatti, a Christian, was gunned down after he said he would seek the reform of the blasphemy laws to stop them being abused to persecute innocent Christians.