Home > News > VE Day reminds us of our responsibilities: COMECE

VE Day reminds us of our responsibilities: COMECE 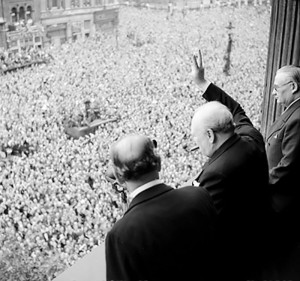 Marking the 70th anniversary of the ending of World War II in Europe or VE Day, COMECE President Cardinal Reinhard Marx called for a sense of collective responsibility and a spirit of service to enable Europe to face its present-day challenges such as the refugee situation and social injustice.

In a statement on Friday, Cardinal Marx said that on VE Day what was commemorated most of all was the suffering that people had to endure during World War II.

“It is a day when we give thanks for liberation from Nazi rule,” he said.

“The fact that we owe our freedom to others means that this commemoration brings us face to face with our own responsibilities. Freedom and responsibility are inseparable.”

He said Europe’s founding fathers understood that peace in Europe could not be achieved overnight, nor could it be achieved once and for all. Peace could only be reached through a process of constant development, one demanding constant vigilance.

The president of the Commission of the Bishops’ Conferences of the European Community said Pope Francis had placed particular emphasis on this point during his visit to Strasbourg last year.

“He recalled that ‘the dream of the founders was to rebuild Europe in a spirit of mutual service which today too, in a world more prone to make demands than to serve, must be the cornerstone of the Council of Europe’s mission on behalf of peace, freedom and human dignity’.”

Cardinal Marx said that for Pope Francis, the keystone of European society is the unconditional respect of human dignity.

“The question he puts to us is this: are we still making demands on other people, or have we reached the point of putting ourselves at the service of others?”

He said this crucial question posed by the Pope affects all our current debates in Europe such as the way we are dealing with the refugees who are seeking protection and assistance in Europe.

“What does it mean in the context of social injustice and tensions in Europe, matters that affect the younger generation who are bereft of future prospects?”

Political decisions must be found that are able to reconcile demands and service.

He said it is precisely through remembering all Europeans have suffered, both in past history and in the present day, that we reinforce our belief that every human life is precious and unique.

The 70th anniversary of VE Day, the day Winston Churchill announced that the Allies had defeated Nazism and the war in Europe was over, was commemorated in Britain, Washington, France, Poland, Germany and elsewhere.

US President Barack Obama hailed the Allied troops as a “generation that literally saved the world”.

In a radio address he recalled, “For over five years, brutal fighting laid waste to an entire continent. Mothers, fathers, children were murdered in concentration camps. By the time the guns fell silent in Europe, some 40 million people on the continent had lost their lives.”

World War II was the most destructive war in history. About 15 million soldiers and 45 million civilians died during the conflict. The Soviet Union lost the most number of people to the war, with an estimated 24 million dead.

The war officially ended on 2 September 1945, V-J Day, when Japan signed surrender documents to the US on the battleship USS Missouri in Tokyo Bay.