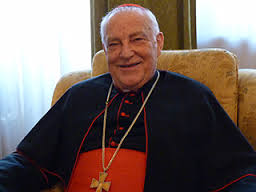 Catholic schools find themselves in a missionary situation in our secular world a recently published Vatican report has stated.

“The Catholic identity of the school is fundamental,” Cardinal Zenon Grocholewski, Prefect of the Congregation for Catholic Education, said at a press conference last week.

“Catholic schools are best not just because they give knowledge and competence, but because they show interest in the person for the good.”

The Cardinal was launching the congregation’s ‘Educating To Intercultural Dialogue in Catholic Schools’ report.

Speaking of intercultural dialogue which builds a civilisation based on love, Cardinal Grocholewski said:

“The civilisation of love, for Christians, does not mean a vague solidarity, but rather an expression of Christ’s charity.”

He continued, “This is the service through which Catholic schools, which always strive to join their work of education with the explicit proclamation of the Gospel, are a most valuable resource for the evangelisation of culture, even in those countries and cities where hostile situations challenge us to greater creativity in our search for suitable methods.”

The document which the Cardinal launched states that nowadays due to the advanced process of secularisation, Catholic schools find themselves in a missionary situation, even in countries with an ancient Christian tradition.

“Catholic schools’ primary responsibility is one of witness. In the various situations created by different cultures, the Christian presence must be shown and made clear, that is, it must be visible, tangible and conscious,” the document continues.

The report states that Catholic schools must, like Jesus Christ, practice the ‘grammar of dialogue’ as a profound way of relating to others.

According to data from the Annual Church Statistics given at the press conference, the number of students in Catholic schools has risen from nearly 55 million in 2008 to around 58 million in 2011.

The document notes that Catholic schools are seeing more and more students of different nationalities and religious beliefs.

Archbishop Angelo Vincenzo Zani, Secretary for the Congregation of Catholic Education, said that “the differences between cultures are not obstacles, but opportunities.”

The goal of Catholic schools should be to find balance between the two cultural extremes.

They need to witness and dialogue, without falling into relativism which holds that all religions are the same with an Absolute that no-one can truly know.

But on the other hand they need to give answers to the many young people “without a religious home”, the result of an ever more secularised society.