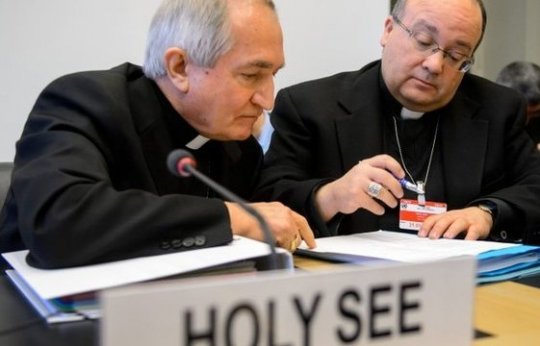 The Holy See has said it will thoroughly study and examine the UN Committee on the Rights of the Child’s Concluding Observations which criticise the Vatican’s handling of child abuse.

However, the Vatican also defended its right to act in accordance with Catholic Church teachings.

“The Holy See does, however, regret to see in some points of the Concluding Observations an attempt to interfere with Catholic Church teaching on the dignity of human person and in the exercise of religious freedom,” a statement said.

It continued, “The Holy See reiterates its commitment to defending and protecting the rights of the child, in line with the principles promoted by the Convention on the Rights of the Child and according to the moral and religious values offered by Catholic doctrine.”

The non-binding observations are detailed and enter into several areas, but those on the handling of child abuse have been the focus of most scrutiny.

One of these claims the Vatican failed to acknowledge the extent of clerical sex abuse and implemented policies that led to the continuation of the abuse and provided the perpetrators with impunity.

The report called on the Vatican to immediately remove all known and suspected child sexual abusers from their posts in the Church and hand over the cases to law enforcement authorities in the countries concerned.

Responding to the findings, Michael Kelly, Editor of the Irish Catholic, said on RTE Radio 1’s News at One that in two years 400 priests or 1% of all priests had been dismissed from the priesthood.

He added that Vatican will be disappointed that this committee has not credited the changes that have taken place.

The UN committee also stated in regard to the Magdalene Laundries, that the Church did not protect the girls and women, and that the Vatican did not take action to investigate the conduct of the Sisters who ran the laundries.

It also failed to cooperate with law enforcement authorities in holding those who were responsible for the abuse accountable.

Among the observations the UN committee suggested the Vatican needed to address were:

– to ensure that an expert commission set up by Pope Francis last year will “investigate independently” all cases of child sex abuse and the way in which they are handled by the Catholic hierarchy. Records concerning past cases should be opened up so that they can be used to hold the abusers.
– that those who may have sought to protect abusers are made accountable.
– “Clear rules, mechanisms and procedures” are established for the mandatory reporting of all suspected cases of abuse to civil law enforcement authorities.

Catholic Voices, a UK group which provides speakers who put the Catholic case across in the media, described the UN committee’s proceedings and report as a “kangaroo court”.

“The report is not only ignorant and misguided, peddling myths for which there is no foundation, but betrays an extraordinary misunderstanding of the nature of the Church and the Holy See, while seeking to impose an ideology of gender and sexuality in violation of the UN’s own commitment to religious freedom,” the Catholic group said.

It claimed that the UN committee ignored the evidence put to it by the Holy See on 16 January. “The Committee has very seriously undermined both its own credibility and that of the UN as a whole,” Catholic Voices stated.

In a detailed article on its website the group puts the principal faults it finds with the report under three headings of 1) ignorance about the Church’s record on abuse 2) misunderstanding about the Church 3) attempt to impose an ideology of sexuality and gender.

The UN committee said it was particularly concerned that the Holy See had consistently placed the preservation of the reputation of the Church and the protection of the perpetrators above children’s best interests.

Catholic Voices responded stating if this were true before the year 2000, the opposite is now the case.

It also pointed out that the UN report gives no acknowledgement of the Catholic Church’s safeguarding guidelines and best practices that are now in place in the Western World in particular.

Nor does it acknowledge that the Holy See, at least since 2001, has been the catalyst of those best practices, persuading bishops’ conferences across the world to put in place measures of the sort pioneered in the US and the UK.