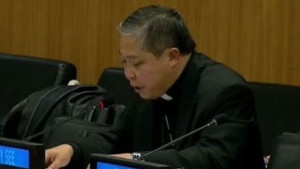 The Vatican’s Permanent Observer to the United Nations on Friday has raised the ongoing persecution of Christians across the globe.

In his address, Archbishop Bernardito Auza detailed recent acts of violence against Christians in places such as Iraq, Syria, Nigeria, Libya, Kenya and elsewhere in Asia.

He told the representatives of the world’s nations that “Even as we speak, thousands across the world are being persecuted, deprived of their fundamental human rights, discriminated against and killed simply because they are believers.”

He added that world leaders should approach the question “with both of our eyes wide open.”

The Filipino prelate highlighted that there had been barbaric images of Coptic Christians beheaded in Libya; churches filled with people blown up during liturgical celebrations in Iraq, Nigeria and Pakistan; ancient Christian communities driven out of their homes on the biblical Plain of Nineveh; Christian students executed in Kenya – “the earth has been getting literally soaked with blood”, he stated.

Referring to the particularly intense persecution in the Middle East, Archbishop Auza reported that in the past 25 years an estimated 2 million Christians have fled from Iraq and its surrounding countries.

Announcing the meeting while delivering a speech at the National Press Club in Washington, Ban ki-Moon said he would meet “Pope Francis to discuss common concerns, including the encyclical on the environment that he plans to issue in the months ahead.”

“I think this will be the first time for any Secretary-General to be invited by the Pope,” UN chief said.

The UN Secretary General will be in the Vatican on 28 April to participate in a workshop on the theme, ‘Protect the Earth, Dignify Humanity’ hosted by the Vatican’s Pontifical Academy of Sciences.

More than 60 environmental experts invited to the gathering will focus on the moral dimensions of climate change and sustainable development.

Ban ki-Moon and Cardinal Peter Turkson, president of the Pontifical Council for Justice and Peace, will give opening addresses before scientists, diplomats, business and religious leaders address participants.

“The desired outcome is a joint statement on the moral and religious imperative of sustainable development, highlighting the intrinsic connection between respect for the environment and respect for people – especially the poor, the excluded, victims of human trafficking and modern slavery, children and future generations,” said a statement by organisers.

Ban ki-Moon said he has invited the Pope, US President Barack Obama and all the leaders of the world to a special summit meeting in September at the United Nations, asking them to adopt a visionary and sustainable development agenda.

“I am sure that all the leaders will come and declare their visions to the world as a way of celebrating the 70th anniversary of the United Nations,” he said.