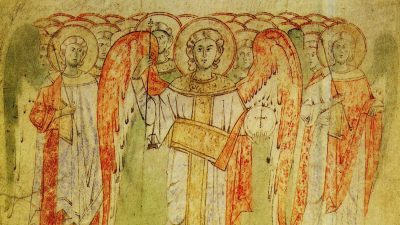 Cover image of Strong in the Face of Tribulation. Credit: Vatican News website.

The Vatican has announced the publication of a book containing the daily homilies of Pope Francis from Casa Santa Marta as well as suggested prayers for the coronavirus pandemic.

As a sign of his closeness to those who were ill due to the virus, or who were unable to leave their homes, Pope Francis began transmitting his daily morning Mass.

According to Vatican News, from 9 March to 18 May, Pope Francis celebrated Mass every morning and it was transmitted throughout the world. Thousands of people, many of whom were non-Catholics, watched or listened through the various Vatican Media channels and other radio and television stations or digital platforms that picked up the transmission. For many, Pope Francis’ Mass became a staple for coping with the adverse effects of the pandemic and subsequent lockdown.

Playbacks of the Mass and summaries of Pope Francis’ homilies were made accessible through the Vatican News’ YouTube channel and web portal. The complete texts of his homilies were also made available as a downloadable digital file, kept up-to-date as English translations became available.

Entitled Strong in the Face of Tribulation: The Church in Communion – A Sure Support in Time of Trial, the text also contained blessings and prayers, including the prayer used during the extraordinary moment of prayer with Pope Francis on 27 March, as well as the decrees of the Apostolic Penitentiary regarding the special indulgences granted because of the special circumstances created by the coronavirus pandemic.

Since the suspension of the daily transmission of the Pope’s Mass, the feedback received from many readers was that the .pdf edition should be made available in print. This has been done, and the booklet that accompanied people as they lived through faith during the first phase of the coronavirus pandemic can now be a concrete keepsake for the closeness of both Pope Francis and Our Lord at this devastating time.

The digital edition of Strong in the Face of Tribulation is no longer available. However, the printed edition is now available through Amazon.com and other publishers who obtain the rights to publish it.

Fr Giulio Cesareo, editorial director of Libreria Editrice Vaticana (the Vatican Publishing House), underlined how important Pope Francis’ homilies were. “He is a father,” Fr Giulio said, “a spiritual guide who accompanied us as we lived that period. His homilies are precious because they are not only valid for back then. We still experience conflicts, shame, difficulties in praying. We were perhaps more receptive and attentive to what he told us back then. But it is important to keep his words with us so as to allow ourselves to be continually nourished by the beautiful things he said that concern life.”