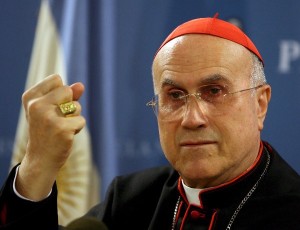 The Vatican press office on Tuesday evening issued a statement denying reports that the former Vatican Secretary of State, Cardinal Tarcisio Bertone, is being investigated for embezzlement.

“There is currently no investigation of a criminal nature” involving Cardinal Bertone, the statement said.

The denial follows a report in the German Bild publication claiming that the former Vatican second in command is being probed over a transaction of €15 million from the Vatican bank to Lux Vide.

Lux Vide is an Italian television-production company with which Cardinal Bertone has personal ties.

According to the Bild report, the transfer took place in December 2012.

It also suggested that the transfer took place despite opposition from the Vatican Bank.

Renè Bruelhart, the head of the Vatican’s Financial Information Authority (AIF), is reported as stating that he could “neither confirm nor deny” the reports.

Last month, Cardinal Bertone denied Italian media reports claiming he had renovated a large and luxurious 700-square-meter apartment for his own use.

The report contrasted the size of the apartment with the humble Vatican guest house where Pope Francis resides.

Cardinal Bertone was appointed Vatican Secretary of State by Benedict XVI in 2006 and served in the position until last year when he was replaced by Pope Francis with Cardinal Pietro Parolin.

Many commentators blame the Italian for contributing to the scandals which dogged the Benedictine papacy through his mishandling of a number of crisis, including the so-called VatiLeaks scandal, which saw confidential Church documents leaked to the media by Pope Benedict’s butler in 2012.

According to ANSA, the leaked documents included letters a prelate sent to Pope Benedict and Cardinal Bertone on alleged corruption and mismanagement in the administration of the Vatican City.

The prelate, Carlo Maria Vigano’, was subsequently switched from his position as secretary-general of the governatorate of Vatican City State to a new post as Apostolic Nuncio to the US.