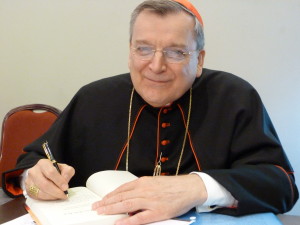 A top Vatican cardinal has criticised governments of “so-called free nations” who compel individuals and institutions to violate their conscience and co-operate in grave violations of the natural moral law.

Cardinal Raymond Leo Burke, who is Prefect of the Supreme Tribunal of the Apostolic Signatura, the Vatican’s highest court, made his comments in his homily at the Church of Saints Peter and Paul in Cork on Sunday.

He was in the city to give a lecture at the Sixth Fota International Liturgical conference.

He told the congregation that part of today’s challenge was “how to live faithful Christian lives in a society marked by the culture of death.”

Cardinal Burke, who is a canon law expert, said that in “many supposedly advanced nations”, there were increasing violations of the most fundamental norms of divine natural law in the policies and laws of nations, and in the judgments given by their courts.

He underlined that justice founded on obedience to the promptings of the Holy Spirit safeguards and defends the inviolability of innocent human life from the moment of conception to the moment of natural death.

It also, he said, safeguards and defends the indissoluble union of man and woman in marriage through which spouses, in cooperation with God, create and nurture new human life.

Addressing the congregation of visiting lecturers and students of theology and liturgy, Cardinal Burke said the situation in many nations of the so-called ‘First World’ was the source of the Church’s deepest concern.

“The lives of millions of our unborn brothers and sisters have been and continue to be legally destroyed through embryonic stem-cell research and procured abortion,” while the lives of the seriously ill, those with special needs and those advanced in years are “increasingly viewed as a burden to be eliminated from society”.

Referring to the issue of gay marriage, he added, “Our laws presume to redefine marriage and the family, the first cell of every society, in defiance of the law of nature.”

“The violation of the integrity of the marital union is justified as the practice of tolerance without respect for the prior demands of truth and charity,” he said.

In what has an important currency for Ireland in relation to the Government’s abortion bill, the Cardinal said that in these countries “freedom of conscience is denied to individuals, even taxpayers in general, and to institutions by means of policies and laws which demand cooperation in acts which are always evil.”

He warned that a “false garment of justice” cloaked the reality that the direct taking of human life at its very earliest stages of development and the direct abortion of infants in their mother’s wombs was always wrong. Even though there might be efforts to justify it as research necessary to find cures for diseases or necessary for so-called “reproductive health.”

“We see before our eyes the evil fruits of a society which pretends to take the place of God in making its laws and in giving its judgments, of a society in which those in power decide what is right and just, according to their desires and convenience, even at the cost of perpetrating mortal harm upon their innocent and defenceless neighbours.”

It is the kind of society which the Church has “rightly deplored” and against which “we have so often fought at the greatest human and material cost,” the Vatican-based American prelate said.

He warned that this kind of society was one which had abandoned its Judeo-Christian foundations and obedience to God’s law which safeguards the good of all.

“It is a society which embraces a totalitarianism masking itself as the “hope,” the “future,” of a nation,” he said and added that our faith taught that such a society can only produce violence and death, and in the end destroy itself.

At the end of his homily, Cardinal Burke prayed that the Holy Spirit might “instruct the hearts of our leaders, so that they realise that the only way to serve justly is obedience to the law of God written upon their hearts”.

Otherwise they might claim, like the false prophets, to be friends of God, while, at the same time, violating grievously the most fundamental tenets of His law which included respect for the inviolable dignity of innocent human life, for the integrity of marriage and the family, and for the free exercise of a rightly-formed conscience.