Concern over effect of Ebola closures in Sierra Leone 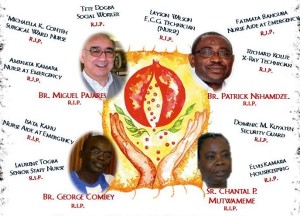 Huge numbers of people have been left without health care in Sierra Leone, the country hardest hit by Ebola.

More than 10,000 cases of Ebola were detected in Sierra Leone resulting in over 3,000 deaths.

However, the number of new cases reported every week are declining.

This has focused attention on the indirect effects of the epidemic, such as the closure of hospitals and health centers.

This is due in part to the loss of health care workers but also because many facilities have been closed along with public services and schools to help prevent the spread of the disease.

Fides has reported that one of the affected hospital is in Lunsar, west Port Loko, serving half a million people.

The St John of God order who run the 150-bed facility have had to close it twice since August 2014. Doctors with Africa Cuamm are now to get involved.

“The hospital is empty, 500,000 people are without health care. We feel challenged to provide all our experience and cooperate with the hospital management and the various partners involved, for the reopening of the Hospital in Lunsar. We must help a rural hospital to resume daily life with courage,” said Don Dante Carraro, director of Cuamm.

In their updates, the St John of Gods state that sixteen of the Order’s staff and Brothers have died in centres in Liberia and Sierra Leone after contracting the Ebola virus.

At the hospital in Lunsar, the virus killed eight co-workers – five women and three men, including a student nurse in her last year of training. All died doing their duty helping the sick.

Both hospitals are working with local health authorities in the respective countries, and this involved temporary closure for disinfection, renovation and replacement of old equipment.

“Both of our hospitals, in Sierra Leone and Liberia, have re-opened in a limited way. We are working in co-operation with national and international agencies and hope to gradually return to full services,” states the St John of God Development Company which raises funds in Ireland for the order.

In mid-January, Misean Cara stated that the Ebola crisis in Africa will have consequences for future generations. Advances in development over the years are being lost.

“Already some of our members have had to stop part of their work,” says Misean Cara CEO, Heydi Foster, speaking of all the countries in West Africa where Ebola has struck.

“Water, sanitation, health and education projects in the works for years are now on hold. Our members tell us that local communities desperately want the schools and health clinics to re-open, but there is little they can do until curfews and quarantines are lifted.”

But there is also a great need for maternal and child health care. The lack of maternity services, for example, has resulted in an increase in miscarriages, breech births, and pre-eclampsia.

“Market days have been put on hold; schools were closed in the country before the end of the school year and their doors remain locked; the number of orphans is increasing by the day,” Bishop Patrick Daniel Koroma told international Catholic charity Aid to the Church in Need.

He has likened the suffering caused by the epidemic to that inflicted by the country’s civil from 1991 to 2002.