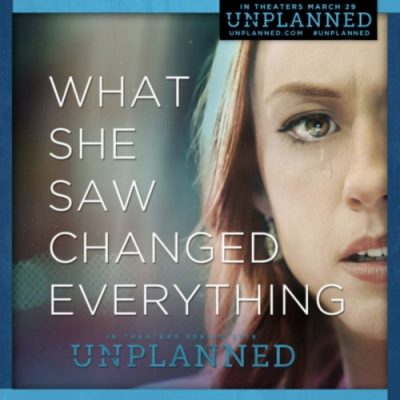 A new pro-life movie in the US has become a big box office hit, coming in fourth place last weekend after Dumbo, Us and Captain Marvel.

The Pureflix movie, Unplanned, which cost $6 million to produce, made almost $6.4 million in its first weekend on general release in over 1,500 theatres.

Starring Ashley Bratcher, the movie tells the story of Abby Johnson, who worked for Planned Parenthood for eight years. It is based on a memoir of the same name.

Abby was one of the youngest Planned Parenthood clinic directors in the United States, working at a clinic in Texas for eight years, where she was involved in upwards of 22,000 abortions.

She was a valued employee, even winning the Planned Parenthood Employee of the Year Award. All of that changed on September 26 2009, when she was asked to assist with an ultrasound-guided abortion. She watched in horror as a 13-week baby fought for and ultimately lost its life at the hand of the abortionist.

At that moment, she realised what abortion actually was and what she had dedicated her life to. Seeking help from a local pro-life group, she swore that she would begin to advocate for life in the womb and expose abortion for what it truly is.

Afterwards, she formed ‘And Then There Were None’ (ATTWN), a ministry designed to assist abortion clinic workers in transitioning out of the industry. To date, this ministry has helped over 430 workers leave the abortion industry.

After her departure from Planned Parenthood, the company took legal action to silence Ms Johnson with a gag order, but this proved ultimately unsuccessful. Today, Ms Johnson spends much time travelling around the world sharing her story. In December 2017, for example, she addressed the annual conference of the Pro Life Campaign (PLC) in Dublin.

Unplanned is the second recent movie dealing with abortion to perform strongly. Last year the movie Gosnell did well at the box office, and so far this year it is among the top 20 bestselling DVDs, with over 107,000 sold since the DVD was released on 5 February 2019.

Meanwhile, in an interview with Crux earlier this week, Abby Johnson said the movie tried to portray abortion workers and women seeking abortions with dignity. “We cannot dehumanize the very people we claim are dehumanising the unborn. We have to treat everyone – the abortion workers, the abortionists, the women seeking abortions – with unconditional love,” she said.

Asked how she would like the movie to “change the world”, Ms Johnson told Crux she wanted abortion to become unthinkable. “I want everyone who sees the film to see how God’s love and mercy can change their lives. And I want people to understand that love is the only way we are going to win the war against abortion.”

The Irish Film Classification Office (IFCO) told CatholicIreland.net that the movie has not been booked in for classification, indicating there is no immediate plan for the movie to go on general release in Ireland.