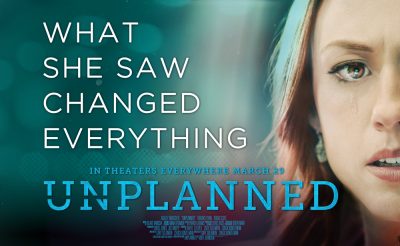 Unplanned poster: What She Saw Changed Everything

From today, high-profile film Unplanned, which tells the story of Abby Johnson’s pro-life conversion, screens in certain cinemas across Ireland.

Abby was an esteemed Planned Parenthood clinic director until she witnessed the procedure she was selling.

After helping facilitate over 22,000 abortions, Abby joined her former enemies at 40 Days For Life to become one of the most well-known pro-life speakers in America.

“The pro-life people of Ireland have suffered greatly in recent years, fighting against the culture of death, against misinformation and seemingly against the tide of public opinion,” says Abby Johnson. “But the truth never fails … I urge every person in Ireland to see this movie.”

During its US release in March 2019, Unplanned ranked in fourth place in the box-office opening weekend, alongside films such as Dumbo and Captain Marvel. Since then, Unplanned has been released across Canada, Australia, the Philippines and Ireland, and is set for release on 25 October in Mexico.

In an interview with CatholicIreland.net, co-directors Cary Solomon and Chuck Konzelman shared why they think this is a film for everyone: “The beautiful thing about this story is that Abby has lived on both sides of this issue. She’s had two of her own abortions. So it’s not condemning. It’s just one woman’s story of transformation.”

When asked why they chose to release their film in Ireland, the co-directors explained: “The people of Ireland asked for Unplanned. We had many, many people reach out to us with urgency for the film to come to cinemas there.

“Due to last year’s referendum, abortion is now a reality in the Republic of Ireland. The people of Ireland have a right to know the truth about abortion and the multi-billion dollar abortion industry.”

They also noted that 21 October is quickly approaching for the people of Northern Ireland, and with that date comes the looming reality of abortion. “The people of Ireland have a right to see what is coming their way,” they said.

To someone who is pro-choice and considering watching Unplanned, Solomon and Konzelman invite them to “come with an open mind” and to “dig deep into both sides for truth so that whatever you stand for, you stand for it with clarity and purpose.” 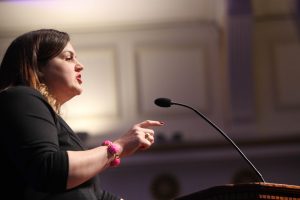 The pair even claim to have had one baby saved by their pre-release screening in Dublin: “A young woman who already had an abortion appointment scheduled came to see the film and, after seeing what Abby saw, she decided to keep her baby. That was the first fruits of this Ireland run of Unplanned.”

Solomon and Konzelman also noted that the success of the Ireland release could impact the film’s UK release. They noted that, if the film does well here, cinemas in the UK will be more likely to jump on board.

To find out where Unplanned is showing in Ireland, or to bring it to a community not listed, visit UnplannedFilm.com/ireland.