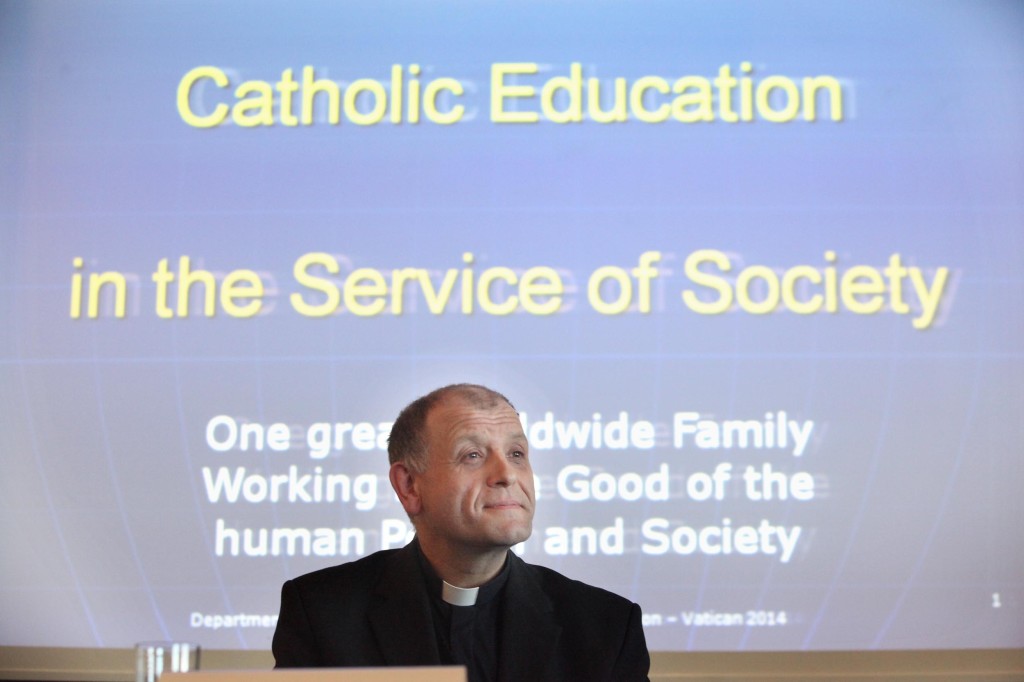 One of the Vatican’s top advisors on education has called on the Church to invest more of its resources in education.

Fr Friedrich Bechina, who is Undersecretary at the Holy See’s Congregation for Catholic Education, was speaking at the agm of the Catholic Primary Schools Managers Association on Friday in Dublin.

In his keynote address, he said more resources needed to be made available for teacher training and further education for teachers and he described education as an investment for the future.

“In times where there are fewer priests and religious in the service of education, as in the case of Ireland today, the question of the training and formation of teachers for Catholic schools becomes particularly apparent,” he said.

He told delegates that Catholic education globally is growing and currently there are over 60 million students attending over 200,000 catholic schools worldwide. About half of the population of these schools are non catholics.

This, he suggested, was “based on the high reputation of Catholic schools, and the demand of parents for a supportive and positive learning environment which is universally provided by Catholic schools.”

“Our experience in countries with a lower percentage of Catholics – like India, Taiwan, Korea and in some Nordic countries – is that through the solid preparation of teachers with Catholic education, non-Catholic teachers come to share our set of basic values,” Fr Bechina said.

However, he acknowledged that in some countries there is a momentum to remove the teaching of faith in schools.

At the same time, countries like Germany, with a large number of immigrants, are making a lot of effort to accommodate and include religious education within the curriculum, he explained.

“The experience is that if religious education is removed from the public sphere, then it runs the risk of becoming separated from human reasoning and may subsequently develop in a more fundamentalist way,” the Vatican expert warned.

“I believe that the underlying question is: What is the model of education that we want?”

He said that if all that was wanted was education which is tailored exclusively to produce highly skilled professionals, and therefore to enhance economic growth, then creative subjects like art, music and physical education could be eliminated.

“However, I am convinced that these subjects, like religious education, are of the utmost importance as they contribute to the holistic development of the human person and, thus, create a sustainable human society.”

He said parents seek an educational approach focused on the integral formation of the whole human person, and not only for the academic standards and training in technical skills and competences.

“The challenge for the future is how to maintain and enhance the high quality of Catholic education,” Fr Bechina suggested.

The Benedictine-educated Austrian also paid tribute to Irish monks who 1,300 years ago brought education and Christianity to his home country. 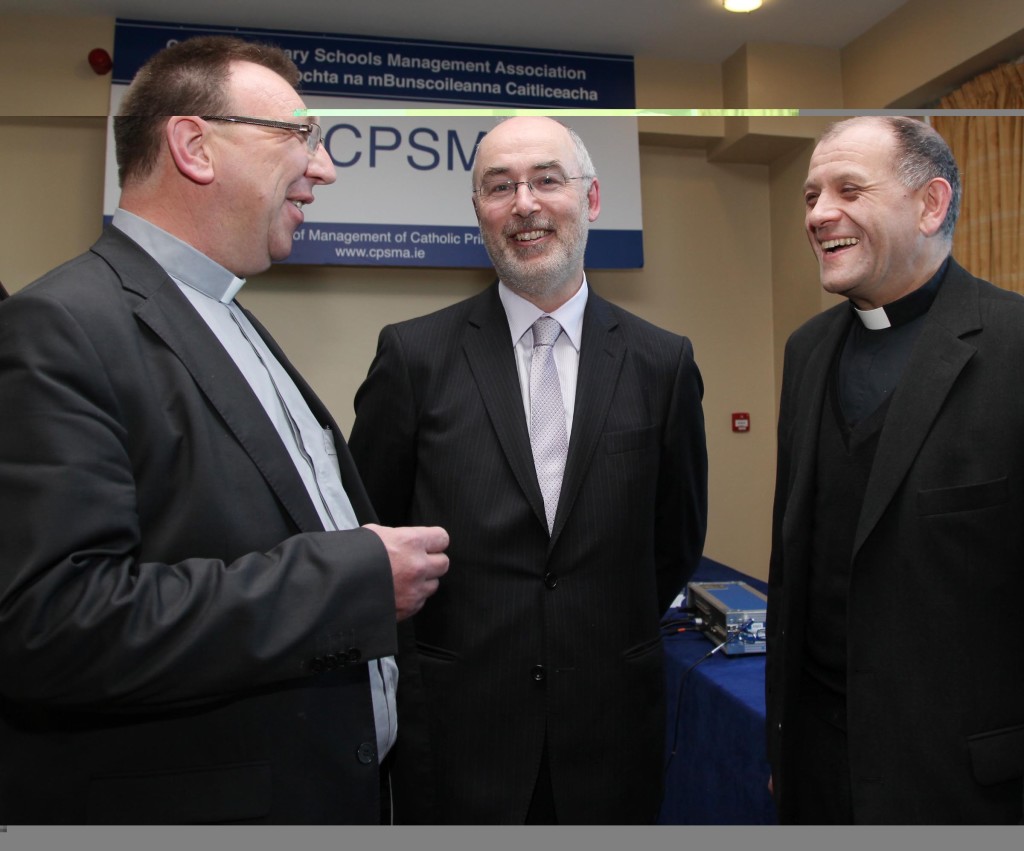 (l to R) Fr Tom Deenihan, General Secretary of the CPSMA, Seán O Foghlú, Secretary General of the Department of Education and Skills, and Fr Friedrich Bechina of the Congregation for Catholic Education in Rome. Photo: John McElroy.

In his address, Seán Ó Foghlú, Secretary General of the Department of Education, told delegates that as a result of the discussions between the Church and the Department, progress had been made on the divesting of a small number of schools which would begin in autumn 2014 and continue into 2015.

The Minister will provide details of these at a later stage in the year.

“Improving quality and accountability in our schools is an essential ambition for all of us. But equally, we must focus on supporting inclusion and diversity,” he told the CPSMA agm.

He said the Department of Education was interested to see the outcome of the CSP’s examination of the issues surrounding diversity and inclusivity and the plans to develop guidelines for Catholic primary schools in this area.

On the issue of patronage, Seán Ó Foghlú said the patronage divestment process was being undertaken by the Department, with the co-operation of the Catholic Church, and presented the “best opportunity to address this need for diversity.”

“Ultimately, what we are trying to achieve under this process is to provide a real choice for parents in the type of primary school to which they wish to send their children.”

Acknowledging that no one Catholic school has put itself forward for a change of patronage as a ‘living school’ as a result of the surveys, he added that there was a viable level of demand for an alternative choice of school provision expressed within the 28 communities surveyed.

“The approach we are taking is to work pragmatically with the main Catholic patron in those areas, to seek to identify potential accommodation opportunities to facilitate wider choice.”

“This may be through existing vacant school accommodation that may become available as a result of planned amalgamations or through other means,” the Secretary General of the Department of Education said.

Speaking to CatholicIreland.net, Fr Michael Drumm of the Catholic Schools Partnership (CSP) said, “The most important point to emphasise is that change can only occur where there are sufficient parents on the ground who wish for that change. That is what the surveys are about.”

He said the level of demand for a change in patronage was somewhere between 2-8% of parents with children in school.

“We are trying to respond to that level. I think the Department now acknowledges that there is a limited minority demand for change and we are working together to try to bring that about,” Fr Drumm said.

Asked about Archbishop Diarmuid Martin’s recent comments that everybody wants diversity but nobody wants it for their own schools, Fr Drumm responded, “In my understanding the best way forward for the possibility of transferring a living school is through amalgamation – most people accept this.”

He explained that where two schools or three schools amalgamate in one area that can give rise to a vacant building and that building can be made available to an additional patron.

“I think amalgamation is key to this process,” Fr Drumm told CatholicIreland.net

“The critical message is that nobody is going to be forced to do anything. The Department officials have made that very clear. The Department is not attempting to impose choice for choice sake – they are attempting to create choice where there is measurable verifiable demand among parents for that choice.”