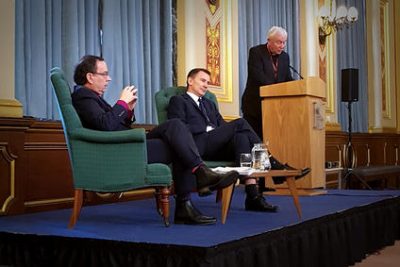 The launch of the British government’s independent enquiry into the persecution of Christians around the world has been welcomed by the Catholic primate of England and Wales, Cardinal Archbishop Vincent Nichols of Westminster.

At the end of last year, catholicireland.net reported how the UK’s Foreign Secretary, Jeremy Hunt, decided after attending a Christmas Day church service with his family in Surrey that such an enquiry is needed.

While he and his family were able to freely celebrate the birth of Our Saviour, elsewhere in the world Christians face discrimination, intimidation and violence merely for expressing their faith.

This week Cardinal Nichols met with Jeremy Hunt and the Anglican Bishop of Truro, the Rev Philip Mountstephen, who will be leading the independent investigation.

According to British government estimates, 215 million Christians across the world face persecution on account of their beliefs. Last year alone, 3,000 were killed because of their Christian faith.

At that meeting Cardinal Nichols said that religious faith is becoming increasingly important across the world, because people of faith are people of hope. He also pointed to a reason why the followers of Jesus Christ may be targeted by corrupt rulers, as being a Christian “always involved giving a critique of power”.

Mr Hunt says the aim of inquiry is to provide “an objective look” at how the British government could better respond to the pressing plight of persecuted Christians.