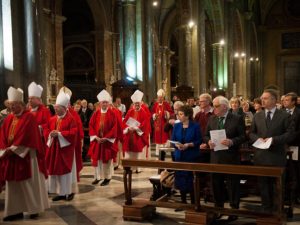 The bishops of England and Wales have announced they will undertake a new independent and comprehensive review of the safeguarding structures currently operating in their dioceses.

In a statement issued on Monday, as the bishops gathered in Rome for their ad limina visit, they said they had spent time together reflecting again on the impact of recent reports “containing stark revelations of child sexual abuse within the Catholic Church, including in England and Wales, and of evident failures of local leadership”.

The bishops said these recent shocking reports had caused them to reflect again on their own leadership and on the responsibilities they hold in England and Wales for ensuring that safeguarding is embedded in every aspect of the life of the Church.

The reports had made it clear that both bishops and religious leaders, in various places, failed to protect the children in their care from those who have done them great harm, they admitted.

They also highlighted how bishops had failed to listen or give credence to those who had courageously spoken out about the profound damage they have suffered through childhood abuse.

Some had taken steps to cover up or minimise the abuse that became known, and this was “a great betrayal of the trust placed in them by the faithful and of the responsibilities that come with episcopal office”, the bishops said.

The Independent Inquiry into Child Sexual Abuse (IICSA), established by the British Home Office, is currently looking into abuse at Catholic institutions. In July, the inquiry released a highly critical report on sexual abuse at two prominent Benedictine schools in England.

Today it is due to begin hearings concerning the Archdiocese of Birmingham.

“We will seek to ensure that the voices of the victims and survivors of abuse, through the Survivors Advisory Panel established by the NCSC, fully inform the review and its recommendations.”

The decision to undertake the review was prompted by the Pope’s recent “Letter to the People of God” on sexual abuse in which the Pontiff pleaded that “no effort must be spared to create a culture able to prevent such situations from happening”.

Each of the bishops of England and Wales has decided to set aside time for the purpose of meeting with victims and survivors of clerical abuse who live in their diocese.

This will be done in cooperation with the diocesan safeguarding coordinator, to assist the bishops in responding in the best possible way to those who speak to them, in their pastoral role as bishops, of their pain, hurt and anger.

They said the impact and consequences of the shame and sorrow they felt would be in their hearts and in prayers throughout their ad limina visit, especially as they prayed at the tomb of St Peter and at the tomb of St Paul, which they described as key moments in their visit.

The issue of clerical child abuse would also be part of their conversation with Pope Francis, when they meet the Pontiff on Friday.

“Our visit, then, has a penitential heart, as in communion with bishops throughout the world, we seek forgiveness from the Lord and grace for our future ministry.”

The bishops said they had reflected on the practical steps they must take in light of all that had been achieved since the report by Lord Nolan in 2001.

In endeavouring to build a culture of safeguarding within the Church in England and Wales, there was now a parish safeguarding representative in every parish and a safeguarding coordinator and a diocesan safeguarding commission in every diocese, composed of experts in the main disciplines needed for effective safeguarding.

It is these experts and independent commissions that take the lead in handling every allegation of abuse, whether from the distant past or the present day, they explained.

They acted in accordance with nationally agreed protocols, including the steps to be taken if allegations of abusive behaviour were to be made against a bishop.

“Much has been achieved. Much is to be learned,” the bishops acknowledged.