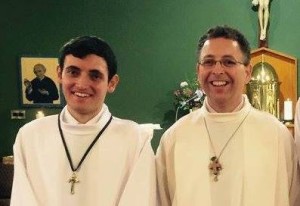 Bishop Seamus Freeman of Ossory, who is a former rector general of the Pallottine Order, on Saturday ordained two new deacons, Rev Brendan McCarrick sac and Rev Jaimie Twohig sac, as members of the Pallottines.

The two new deacons have highlighted how both Youth 2000 and Medjugorje played a part in their vocation stories.

Brendan McCarrick recalled first contemplating his future direction as he prepared for his mock Junior Cert in February 1993 when he first encountered the words of poet Robert Frost, words which he said “have remained with me, and words which I have returned to on many occasion as I have forged my way through life.”

“Two roads diverged in a yellow wood,
And sorry I could not travel both
And be one traveller.”

He later went to college and studied engineering but applied at 20 to study for the priesthood.

For three years he struggled with his studies in the seminary before realising that he was in the wrong place.

“I was lonely and alone in a seminary, in a class of over twenty lads, and over one hundred and seventy lads studying for diocesan priesthood.” 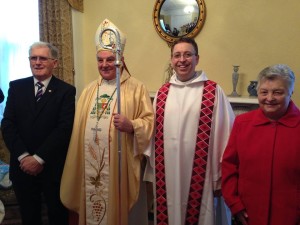 A life changing event happened in 2008, when Brendan travelled to Australia for World Youth Day, where his faith was reinvigorated.

“It was there I decided, during my time in prayer that God was still calling me to priesthood, the only decision was where? A return to diocesan priesthood or community/religious life?”

Throughout that year he discerned and prayed for guidance as to which road should he travel.

While attending a Youth 2000 event, he met the vocations director of the Pallottines, and he invited Brendan to a weekend retreat in Thurles, where he could learn more about the Pallottines, St Vincent Pallotti the founder of the Society and about where God was guiding him in my life.

“During that weekend I felt welcomed and at home, and knew God was calling me to ‘give, offer and surrender my whole life to God.’”

On 11 August 2009, while in Medjugorje on his annual retreat, Brendan received a phone call from the provincial of the Pallottines, congratulating him that his application to become a member had been accepted.

“Three years later I took my first promises to the Society, ‘to give, offer and surrender my whole life to God’, and this I do each day by trusting in God, surrendering to his will, and by believing in God, that he is guiding and directing me each day, so that I will receive that strength and courage to follow the road less travelled.”

The other new deacon, Jaimie Twohig went to Medjugorje in 2005 where he had “a very powerful experience one night at a prayer meeting”. 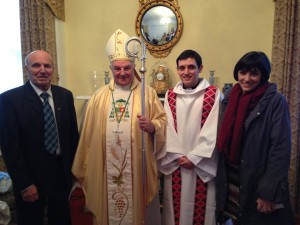 “It is very hard to put it in to words but to put it simply I knew that God loved me completely. I can’t describe the peace and the joy I felt. The feeling of emptiness inside of me was gone. This experience changed my life forever.”

This consolation came at just the right time because a period of extreme trial and suffering was about to begin when his father passed away in 2007.

“The sadness that comes with someone so close passing away is very hard. He was not just my Dad but also my close friend.”

This time of trial brought him closer to his mother and deepened his prayer life. “As a result I began to feel the call to priesthood.”

At this point he had also joined Youth 2000 and this deepened his love for Jesus and Our Lady.

“What really touched my heart about Youth 2000 was the witness of the priests. They were so alive and joyful and so in love with Jesus. I wanted to be like them, to live a life for God.”

He finally decided to do something about the call he was feeling in my heart in late 2008. “I didn’t feel called to diocesan priesthood so I knew that a community life was the way to go.”

In early 2009, he was invited to a Pallottine vocations weekend by Fr Emmet O’Hara. “This weekend left a deep impression on me. I had been to the Pallottines in Thurles many times before but this time I felt great peace and it felt like home.”

“After this weekend was over I knew the Lord wanted me to apply to the Pallottines.”