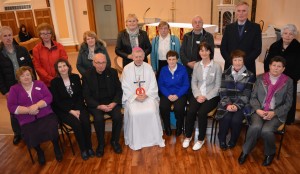 Tuam Diocesan Eucharistic Adoration Committee has put out a message to priests and parishes that trained teams are ready to set up a system of viable weekly adoration in any parish of the diocese.

Even where adoration already exists, they will provide help to strengthen and expand it.

At the invitation of Archbishop Michael Neary of Tuam last August the Apostolate of Eucharistic Adoration’s National Training Team got involved in helping set up the diocesan adoration programme.

In a letter to priests and people of diocese, Archbishop Neary called for volunteers and said he was “satisfied that this development will enhance and enrich the spiritual life of our parishes by leading people to the feet of Jesus Christ.”

He added that the programme was structured in such a way that it would not increase the workload of priests.

Having undertaken the training, there are 12 contact teams ready to help the many parishes that have already requested a weekend presentation from the committee.

Tuam is one of 20 out of the 26 dioceses in Ireland which have undertaken training with Apostolate of Eucharistic Adoration, ranging from Galway to Elphin which is at the early stages of training.

The Apostolate of Eucharistic Adoration is an Association of Adorers of the Blessed Sacrament and is based in Ireland but it has also started training programmes in Britain including in the Diocese of Arundel and Brighton.

The Apostolate began back in the late 1990s but has gained greater momentum in the last four to five years with the encouragement and support of the bishops.

“Everyone has needs, it may be sick relatives, or it might be somebody looking for a job, or that they are in dire need financially and they are trying to find advice somewhere, and this seems to touch them,” John Howard, National Co-ordinator of the Apostolate of Eucharistic Adoration told CatholicIreland.net.

There have been many strong testimonies as to the power of adoration.

One includes a man in Tuam who spent all of his time at work. He had come from a Buddhist background and when he asked people why they went into the Church they invited him to adoration.

Although he never seemed to have time outside of work he spent a full hour there. After a period of time, and many visits before the Blessed Sacrament, he decided to convert to Catholicism.

Another young girl, who waved at the monstrance in the church, told John Howard that she always drops into the church on her way to school to say a prayer, or she often waves and hello as she passes.

John Howard has countless stories of conversions and returns to the church.

He also feels that vocations have improved in his local parish in Navan since adoration started.

There was one ordination in 30 years, and there have been eight ordinations since adoration began around 25 years ago. He feels this is testament to the power and fruits of adoration.

Parishes getting involved can have adoration to suit them – anything from one hour to an afternoon or evening per week. Some even run adoration sessions 24/7.

People of all ages get involved, and they come from all walks of life – teachers, nurses, bus drivers, shop assistants, religious sisters and brothers, and priests.

On average between 100-150 people attend the initial diocesan launch, and those who are interested usually totals around 35-40 people, who then attend eight further training sessions.

Topics at these include scripture, insight into the ‘real presence’, and the teachings of the church, and practical issues such as how to go about setting up adoration in a parish and sustaining it.