Home > Featured > Trump tells Catholic voters – I will fight for you

Trump tells Catholic voters – I will fight for you 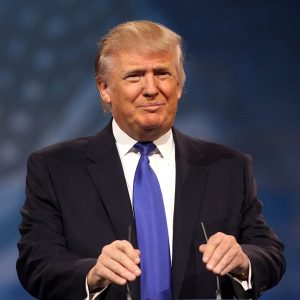 The US Republican Party presidential candidate, Donald Trump, may be anti-Muslim and anti-Mexican, but he claims to be pro-Catholic.

In a letter to a Catholic Leadership Conference held in Denver last week, Trump wrote: “Catholics in the United States of America are a rich part of our nation’s history.

“The United States was, and is, strengthened through Catholic men, women, priests and religious Sisters, ministering to people, marching in the Civil Rights movement, educating millions of children in Catholic schools, creating respected health care institutions, and in their founding and helping the ongoing growth of the pro-life cause.

“I have a message for Catholics: I will be there for you. I will stand with you. I will fight for you.”

Traditionally, before the mid-20th century especially, American Catholics tended to vote for the Democratic Party, with the Republican Party identifying itself with Protestant tradition and values. It is no accident that America’s first Catholic President, John F Kennedy, was a Democrat. However, with the Democratic Party increasingly championing the legalisation of abortion, many Catholics now choose to vote Republican.

So far, the right to life has featured prominently in the presidential debate. Although Trump, who is a Presbyterian, has in the past made statements in favour of legalised abortion, he now claims to be pro-life, and he contrasts his position with that of Hillary Clinton.

How successful this appeal will be in influencing voters on 8 November remains to be seen. Certainly, there are many prominent American Catholics who have spoken against Trump, and many have also spoken against Clinton. Archbishop Charles Chaput of Philadelphia told his flock that each of the candidates was ‘bad news for our country, but in different ways’.