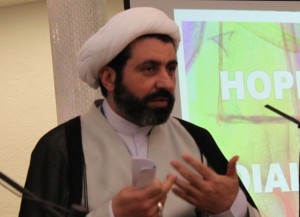 An Iranian Imam, who is Director of the Islamic Centre of England, received a standing ovation at a joint Irish/UK sponsored Focolare event in Liverpool last week.

Speaking on the topic ‘Hope for Dialogue’ on 30 July 2015, Dr Mohammed Ali Shomali said dialogue is based on love but some people have never experienced love.

“It is hard for us to understand how that person feels. He is like an orphan. We have the joint responsibility to call them [these people] towards God.”

Often religion is cited as a cause of problems between people said Dr Shomali. “The problem is that people love God but in a way that is not right.” Some have a “possessive love for God: ‘That is my God, not your God'”.

“The root [of this religion] is ignorance or ego. ‘I want to have a monopoly. I want God to justify my selfish work, to justify killing and injustice’.”  This is not God, he said. “This is a human being projecting his ego as God.”

“You try to rise to be closer to God, to be a godly person. When we go towards God we are able to love everyone, wish good to everyone. We are people working and speaking according to the word of God.” 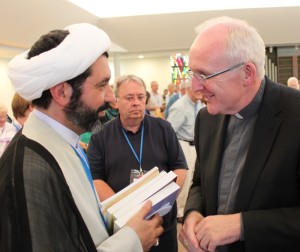 Since the late 1990s, Dr Shomali has been involved in Shia-Christian dialogue, spending periods of time with Benedictines, Jesuits, at the Vatican and at the Focolare town of Loppiano.

The six ’rounds of dialogue’ he instigated on topics like faith and reason, ethics, friendship, community have resulted in a series of publications.

Concluding his address, Dr Shomali said each person was like a ‘drop of water’.

“What can a drop of water do? Even if you have one millions drops of waters you cannot do that much. But if these drops of water become united then you can have a nice lake. Our prayer is that that lake will grow and we will have that ocean of unity.”

Speaking CatholicIreland.net afterwards, Dr Shomali said that the Shia and Sunni Muslims needed to  increase their efforts “to appear together more and support each other more in public so people know there is  no problem between the scholars and leaders.”

He said the Muslim community needed to help their young people understand that they should not trust people “just because they quote the Koran”.

“We have to work with youths to make them aware of the danger of trusting such people and the danger of going after people who speak beautifully but there is no real depth of spirituality of love for God.”

A man of God, said Dr Shomali, will always try to unite people “to build unity over unity – unity of husband and wife, unity of parents and children, unity of neighbours, unity of people of different faith but these people [ISIS] are very divisive even dividing the Muslim nation.”

Dialogue is the most natural thing for human beings, said the Imam who is involved in the formation of thousands of clerics in Iran.

“The very fact that we are human beings makes dialogue for us the first choice. If two human beings – either individuals or groups of people, stop communicating with each other I think they are endangering their humanity,” he said.