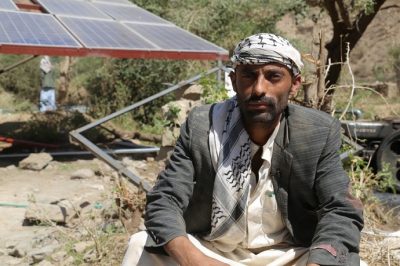 Bakeel Al-Shuraihi sits before the solar panels that power the pump on his village’s freshwater well. (Photo: Islamic Relief)

Irish Catholic overseas aid agency Trócaire is doing its best to reduce human suffering in Yemen by helping to provide safe water supplies and sanitation to communities besieged by the civil war.

The war, which broke out in 2015 between the Yemeni government and the Houthi militia, is in effect a proxy sectarian war between officially Sunni Saudi Arabia and mainly Shi’a Iran.

The United Nations estimates that as many as 17,700 civilians have been killed in the conflict, while at least another 50,000 have died as a result of an ongoing famine created by the war. As a result of the conflict more than 3.3 million have been displaced from their homes and 80 per cent of the population, some 24 million people, are in need of assistance.

A limited ceasefire was agreed in December last year, but according to Trócaire’s Garry Walsh: “The situation in Yemen is a heart-breaking example of an entirely human-made disaster. Conflict and the deliberate blocking of aid has brought the population to the brink of famine.

“Yemen’s traditional economy has almost completely collapsed. Millions in Yemen can’t afford food, water, medicines and other basic essentials. They are now reliant on the support of international organisations like Trócaire.”

One of the key ways that Trócaire is helping is by funding water and sanitation projects. This is vital as water-borne cholera is now a major threat, with more than 120,000 suspected cases of cholera reported so far this year.

The agency is working with the local charity Islamic Relief to deliver water infrastructure projects, some of which are using solar energy to power water pumps.

An example of the impact of these projects is provided by Bakeel Al-Shuraihi, a father of eight children living in the village of Wadi Alasan. The village had a well, but because of the war it had no fuel to run the water pump necessary to draw water.  As a result, Bakeel and other villagers had to travel 1.5km to the only other working well in the district.

Such was the demand at this other well that people had to stand in a queue to draw water and sometimes the queue was so long that not everyone would get to draw water every day.

Now, Trócaire and Islamic Relief have provided the Wadi Alasan well with a solar-powered water pump, which addresses the fuel shortage problem and provides a sustainable energy solution.

“We do not suffer to get clean water. We can get as high a quantity as we need and the water source is only a few metres from our houses,” Bakeel said.

Twelve other villages in the area have been provided with similar solutions to ensure their water supplies, and as a result health clinics, schools and other public institutions are able to function normally once again.

Around 11,000 Yemeni people who have benefited from Trócaire’s support of water projects in their region. “This Lent, please consider donating to Trócaire so we can continue to support communities like this around the world,” Mr Walsh said.