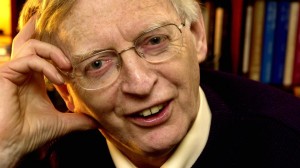 Tributes have been paid to the theologian and biblical scholar, Professor Sean Freyne, who died on Monday in Dublin.

She described Professor Freyne as “an absolute gentleman” and “the quintessential Irishman, always asking the probing question”.

Sean Freyne was a native of Tooreen in Co Mayo. He captained the county’s minor football team which won the All-Ireland in 1953. However, he was deprived of the joy of playing in the final by the College authorities in Maynooth where he was studying to be a priest.

In her tribute, Mary McAleese said she hoped that as a devout Mayo supporter he had been well enough to enjoy the county’s victory in Croke Park last Sunday.

Though resident in Dublin for many years, Professor Freyne continued to support his home county and attended Mayo championship and league games year after year.

In an interview with the Mayo News a few years ago, the former priest explained, “I love football and the GAA is a huge part of my life. It’s a major social thing in Irish society and I have made many great friends through the GAA over the years. Heading off to games around the country is a real delight and something I enjoy enormously.”

A former professor of theology in the School of Religions and Theology in Trinity College Dublin, his academic interests included Galilee in the time of Jesus, the Gospels, and aspects of early Jewish and early Christian history.

Among his most recent publications was the book, ‘Jesus a Jewish Galilean: A New Reading of the Jesus Story’.

Professor Freyne lectured widely in the US and Australia. Between 1979-80, he served as a lecturer with the Department of Studies in Religion at the University of Queensland, Brisbane. For the three years before that, he was Professor at Loyola University, New Orleans. Between 2007-2008, he was Visiting Professor of Early Christian History and Literature at Harvard Divinity School.

He was a member of the Royal Irish Academy and a fellow of Trinity College, as well as a trustee of the Chester Beatty Library of Oriental Art.

“Arising from my work on the social and religious world of Galilee in Hellenistic and Roman times, I have been drawn into the current ‘third wave’ of historical Jesus studies. One of my recent publications, ‘Jesus a Jewish Galilean’, gathers together many of my ideas on both Jesus and Galilee developed over the years,” he told an interviewer some years ago.

He died peacefully at home on Monday, surrounded by his wife Gail and daughters Bridget and Sarah.

He will be buried today in Culmore graveyard, Kilkelly, Co Mayo at 5pm following a funeral Mass in Rathmines.