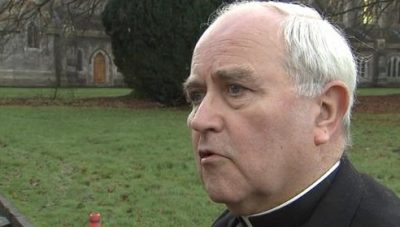 The president of the Irish Bishops’ Conference has paid tribute to Bishop Séamus Hegarty’s dedication to Irish emigrants.

In a statement on Saturday, Archbishop Eamon Martin noted that Bishop Hegarty, who died on Friday, was an active member of the Commission for Education in Northern Ireland and on the Council for European Affairs.

He said what stood out was Bishop Hegarty’s dedication to Irish emigrants and their families, and his response to Irish prisoners overseas.

Archbishop Martin said Bishop Hegarty often intervened, during his 30 years as a bishop, at episcopal conference meetings “to draw attention to the personal, social and economic challenges facing emigrants, and he supported efforts to raise vital funds for the mission to those who face challenges far from home”.

Archbishop Martin said he was “saddened” by the news of Bishop Hegarty’s death, which had come during a meeting of the Irish bishops. “We prayed for the happy repose of his soul and for the comfort of his family and close friends,” he said.

Speaking on a more personal level, Archbishop Martin said he was grateful to Bishop Hegarty for his encouragement and support as his bishop in Derry from 1994 until his retirement in 2011.

“He was unstinting in his support for my role as teacher and president of St Columb’s College. Having been a school principal himself for many years, he was passionate about the importance of education for young people and he had a strong awareness of the issues facing school staff and managers.

“He worked tirelessly to secure the new school sites for girls’ post-primary education in the City of Derry and to ensure that the very best facilities were being made available for our young people.

“When he came to Derry, he often spoke lovingly of his native Donegal, yet he quickly made many friends among the parishioners of the Diocese of Derry, including among the Irish language community – he was a native speaker himself. Bishop Séamus was strongly pro-life and he was always anxious as a faith leader to nurture the fledgling peace process.”

Archbishop Martin expressed his own sympathies and those of the Irish Bishops’ Conference to the family of Bishop Hegarty, to Josie, his beloved housekeeper and carer, to the priests of the Diocese of Derry and to Bishop Donal McKeown, as well as to his many friends in Raphoe Diocese.

Separately, Bishop Alan McGuckian SJ of Raphoe said Bishop Hegarty had a long episcopal ministry and he noted that he had served in Raphoe Diocese for many years as priest and bishop.

Bishop McGuckian acknowledged that his ministry as bishop was deeply challenged. “During those years there was the tragedy of serious crimes of child sexual abuse perpetrated by priests in the diocese. Bishop Hegarty was challenged about his management of those situations. Addressing failures on his own part, Bishop Hegarty asked for forgiveness from those who suffered cruelly.”

Following his resignation in 2011 on grounds of ill health, Bishop Hegarty said, “I am deeply sorry that anyone was hurt through my management of allegations historically.”

Bishop Hegarty’s successor in the Diocese of Derry, Bishop Donal McKeown, also issued a statement. In it he said, “Bishop Séamus had an impressive dedication to his role as a priest and bishop, with a special expertise in education. His concern for Irish emigrants around the world was constant and heartfelt.”

He received his early education in Kilcar National School, St Eunan’s College, Letterkenny, and St Patrick’s College, Maynooth, which he attended from 1959 to 1966.

He graduated in Celtic Studies and was fluent in Irish, English and German. He was ordained to the priesthood at St Patrick’s College on 19th June 1966.

Prior to his appointment as bishop he served as curate in Stranorlar. Bishop Séamus was appointed as Bishop of the Diocese of Raphoe on 12th February 1982. His episcopal ordination took place at St Eunan’s Cathedral, Letterkenny, on 28th March 1982.

Following the resignation of Bishop Edward Daly on 26th October 1993, Bishop Séamus was appointed Bishop of the Diocese of Derry on 1st October 1994 and was installed at St Eugene’s Cathedral on 6th November 1994.

On 7th November 2011, Bishop Séamus issued a statement saying that, having been diagnosed with “a condition which is, unfortunately, irreversible and progressive”, he had submitted his resignation because he was no longer able to fulfil his role as diocesan bishop.

On 23rd November 2011 the Holy See announced his resignation had been accepted.