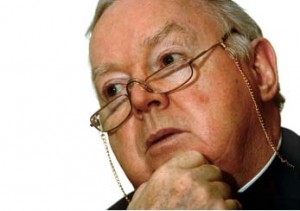 Tributes have been paid to a former Irish-born president of one of America’s leading Catholic third level institutions who passed away recently.

Sadness has been expressed in both Ireland and the US following the passing of Fr Bartley McFadden CSC.

Fr McFadden, or MacPháidín as he was better known, was a native of Annagry in West Donegal, but spent most of his career in Boston. He died on St Patrick’s Day aged 79.

He was the eighth and longest serving president in the renowned educational facility Stonehill College in Boston which was set up by the Congregation of Holy Cross in 1948.

Under his leadership, Stonehill’s academic reputation grew dramatically and the College’s facilities and endowment were enhanced considerably.

“Fr Bartley was a dynamic president. The College grew dramatically under his leadership. He rallied alumni and friends to the Stonehill cause and translated that affection into a powerful instrument in moving the College forward.”

He said that as a priest of the Congregation of Holy Cross, Fr Bartley was dedicated to the College and “that deep commitment was evident in how he transformed the College academically, aesthetically and financially.”

Fr Denning continued, “Affable and with a natural instinct for making connections and building relationships, Father Bartley always understood the importance of vision and how to secure it, shaping Stonehill into a vibrant community of scholarship and faith.”

Fr MacPháidín had many notable achievements at the College. In 1999, he received Stonehill’s Outstanding Alumnus Award in recognition of all that he had achieved for the College.

On the occasion of Stonehill’s golden anniversary, he received the College’s Moreau Medallion in recognition of the important role that he played in Stonehill’s first 50 years.

Fr MacPháidín was active in the promotion of private higher education at state and federal levels.

He participated in community causes and also maintained a strong interest in Irish affairs.

He served on many boards, including those of the American Ireland Fund, Brockton Hospital and Xaverian Brothers High School. He was also chaplain to the New England Chiefs of Police.

Fr Francis Dillion, vice president for advancement, who worked closely with Fr MacPháidín throughout his tenure, including the College’s first Capital Campaign which raised over $23 million, said Fr MacPháidín had a uncanny knack for making things happen.

“A gifted and multilingual story teller who was blessed with plenty of Irish charm and a razor sharp intellect, Fr Bartley had flair and a capacity for making things happens. He did so repeatedly in leading the College but, at the same time, his pastoral outreach was legendary. I might add, he was a very fine cook, especially when preparing wonderful Italian cuisine,” noted Fr Dillon.

In 2002, he received the papal cross, Pro Ecclesia et Pontifice, from the Vatican in tribute to his service to the Catholic church and to the pontiff.

Fr MacPháidín earned his Bachelor of Arts degree from Stonehill in 1959, having been directed to the College by the late Fr Patrick Peyton, CSC, the “Rosary Priest.”

In 1963, Fr MacPháidín was ordained a priest in the Congregation of Holy Cross. In addition to his work for the College and for higher education, he maintained a strong interest in Irish affairs and was active in groups such as the Donegal Society and the Irish Cultural Centre in Canton, which named him as their Man of the Year in 1993.

Fr MacPháidín was the recipient of honorary degrees from the New England School of Law, Bridgewater State College, Rivier College, the University of the Holy Spirit in Beirut, Lebanon, and Yaroslavl State University in Russia.

Fr MacPháidín is survived by his brothers John of Donegal, Tadgh of Dublin, his sister Margaret of Donegal, and many extended family members.

His funeral Mass took place on 30 March in the Chapel of Mary at Stonehill.