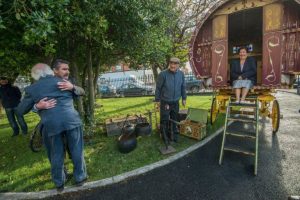 Archbishop Diarmuid Martin of Dublin has expressed solidarity with the Traveller community over the way some of their children were treated in education, social care and especially in industrial schools.

At a farewell thanksgiving Mass for the ministry of Fr Derek Farrell of the Parish of the Travelling People, the Archbishop referred to an RTE documentary broadcast on Wednesday evening which highlighted the issue.

“Why were your young boys and girls treated in such a way? What does that say about our attitude and respect for Travellers?” the Archbishop asked.

If every element and species within God’s creation deserves protection, so also does the cultural heritage of any people and their own special identity, he said on Thursday evening at St Peter’s church in Phibsborough.

He added, “Traveller identity must be shielded, protected and fostered. It must be assigned legal protection in a manner which prizes an identity which is irreplaceable.”

In his homily on the Feast of the Archangels, Archbishop Martin said that angels remind us that God cares; that even if the Church has neglected the Travelling community, God has not.

“The travelling community has a real sensitivity to the fact that God offers his blessing to all, especially to those who are most vulnerable,” he said.

Describing the Parish of the Travelling Community as unique, the Archbishop also paid tribute to Cardinal Desmond Connell for his foresight in establishing the parish which responds to the needs of Travellers.

Noting that the parish is called the Parish of the Traveling People and not for the Travelling people, Archbishop Martin said it was an act of trust and confidence in the community to take the leading role in forms of pastoral care and religious development which responds to the culture, traditions and identity of Travellers.

In his tribute to Fr Derek Farrell, he said the priest was “a true friend of the Travelling People” who did not seek any great publicity for himself but placed his talents fully at the service of the Travellers and their place in society.