Home > News > Tragedy struck “at a beautiful moment in their lives”

Tragedy struck “at a beautiful moment in their lives” 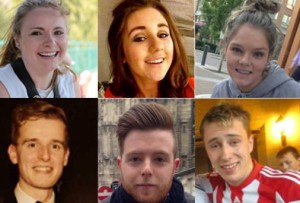 The six victims of the Berkeley tragedy. Pic courtesy: Independent.ie

“There are moments in which prayer becomes almost a natural human response in the face of the inexplicable”, Archbishop Diarmuid Martin of Dublin said on Saturday evening at a special commemorative Mass for the victims of the Berkeley tragedy.

By Saturday evening, over 2,000 people had signed the Book of Condolence at St Mary’s Pro Cathedral including former president Dr Mary McAleese and her husband Dr Martin McAleese.

In his homily, the Archbishop told the packed church that the six young men and women were “the products of what is best in Irish families” and that the tragedy in Berkeley struck when they were at a “beautiful moment in their lives”.

He said the tragic events in Berkeley “have struck us all and have made us stop in our tracks” and instantly touched hearts.

It was an event with which each of us could identify, “because we are familiar – each in our own way – with the dreams and hopes of young people”.

Recalling his own experience as a 21 year old seminarian, before the J1 programme came into existence, of working for a summer in London and taking his first steps away from the security of family and the routine of seminary, he said he had been “proud of asserting a new sense of personal autonomy”.

“It is the typical mark of growing up, of leaving adolescence, of seeking a sense of exploration, not just of new places to go to, but also of exploring of what is going on in my own heart.”

He said the tragedy at Berkeley struck suddenly and struck young people at a beautiful moment in their lives.

In the days since the tragedy unfolded, people have tried to express in words what the tragedy meant for them.

“The young people’s friends and companions barely kept their tears back as they searched for their words. They tried to find words to express their grief and loss and their sympathy with those who have survived and to those who are bereaved.”

Dr Martin said that every parent could identify what happened as “their own worst nightmare”.

“We all reflected on how horrible it was that such a tragedy could have struck young people just at that unique moment of finding themselves and finding new autonomy.”

In a tribute to Ireland’s young people, the Archbishop said they are “generous and idealistic and sensitive to the shallowness and hypocrisy that sometimes marks our adult society”.

They ask the deeper questions about what their life is about, alongside their healthy youthful sense of enjoying themselves.

“Beneath a deceptive outward appearance of security, they are still searching for the meaning of friendship and the meaning of their own lives and where they will find happiness.”

The Berkeley tragedy, he said, “means that our future has been robbed of the unique goodness which was the mark of six young Irish men and women. This tragedy should renew within ourselves – all of us – that search for integrity and idealism and goodness that they will always represent”.

He said the five Irish and one Irish American students “were the products of what is best in Irish families; that desire of parents to see their children flourish and be free and be generous and be the sort of person that would make them proud”.

“The goodness and generosity of these young men and women were the fruit of the generosity and hopefulness of parents who gave their best to set their children on the road to fulfilment.”

“Many today will say that they do not pray or that they find prayer difficult. But there are moments in which prayer becomes an almost a natural human response in the face of the inexplicable.”

He said the Mass on Saturday evening was to pray for the repose of the souls of those who have died at the Berkeley tragedy and for the injured and the traumatised.

“We remember the inconsolable grief of parents and family and closer friends.”

“But out of this tragedy we learn from the life of our young people what the things are that remain, not just after this tragedy, but the things that remain deep in every human heart and which we treasure.  We treasure them in our hearts where words are secondary and goodness and caring and love are the life blood.”

“May Ashley, Eimear, Eoghan, Lorcán, Niccolai and Olivia — rest in peace and enjoy their human fullness now in life eternal with the Lord”.

Addressing the congregation at the end of Mass, where there was standing room only, the Archbishop thanked all those who had attended as a sign of solidarity with the families as they mourn their loved ones and with those who are still injured.

Meanwhile, a statement issued on Saturday evening by the Irish Consulate in San Francisco on behalf of the families of Olivia Burke, Eoghan Culligan, Lorcán Miller, Niccolai Schuster and Eimear Walsh.

In it, the families said that as they were leaving Berkeley to return home with their “beloved sons and daughters, Eimear, Eoghan, Lorcan and Niccolai, we would like to thank everyone in America and Ireland for their sympathy and support, which has been a tremendous comfort to us at this tragic time”.

They paid tribute to the local authorities, emergency services, medical staff, parishes and communities of Berkeley.

“In addition we are forever grateful to the Irish Consul, Philip Grant, and his local team, and also the amazing service and support received from Aer Lingus, the Department of Foreign Affairs, US Ambassador Anne Anderson, and a special appreciation to Minister Deenihan.”

“We cannot thank enough the students that were in the apartment and apartment complex that night. The manner and speed at which they reached out to our families, to our Consul, and to each other was faultless. Our children were extraordinarily blessed in their friends and we are enormously proud of them.”

They also thanked the Irish communities of the Bay Area – coordinated by Fr Brendan McBride, Fr Aidan McAleenan, Celine Kennelly and their colleagues at the Irish Immigration and Pastoral Center – who had been “a constant source of support and comfort”.

They said their thoughts and prayers are with the Donohue family and Ashley, who was laid to rest on Saturday in Sonoma, and with Aoife, Clodagh, Connor, Hannah, Jack, Sean and Niall who remain in hospital and with their families. “We wish them a speedy recovery,” they said.

“We very much appreciate the support and sympathy that has been expressed, but now we ask for privacy so that we can mourn the sudden and tragic passing of our beloved sons and daughters, with the dignity that they deserve.”