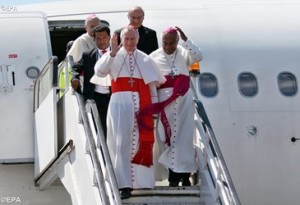 The Vatican’s Secretary of State, Cardinal Pietro Parolin, arrived in the capital of Timor Leste on Thursday to launch the tiny South East Asian country’s celebration of 500 years of catholicism.

Today, the Pope’s second in command, will sign a concordat between Timor Leste and the Vatican and preside at a Mass at Taci Tolo, the place visited by Pope St John Paul II in 1989 when East Timor was still under repressive Indonesian rule.

The concordat has been under negotiation since 2006 but it was only finalised two months ago.

On Thursday, Cardinal Parolin spoke to Timorese seminarians about formation to the priesthood, emphasising that “Discipleship is not merely a private relation”.

“On the contrary, the deeper our relation with Christ is, the more we are compelled to go forth, to be missionaries, to bring what we have received, namely God’s love and mercy, to others especially to those who live on the periphery of society, those who are marginalised, those who are forgotten,” he said.

According to Fides, Bishop Basilio do Nascimento, president of the Catholic Bishops’ Conference of Timor Leste, and apostolic administrator of Dili and Baucau, said the event was an historic one for Timor Leste and for the local Catholic community.

In a message released last week, Pope Francis recalled the many missionaries who had the “courage” to go to Timor Leste.

The government of Timor Leste recently said that the Catholic Church “for 500 years has provided great spiritual, human and material support for the people of Timor, making a decisive contribution towards Timor Leste’s process of liberation”.

The Portuguese arrived in 1615, and began evangelising as well as colonising and exploiting its resources such as sandalwood.

It was only in 1975 that Portugal relinquished its hold. In late 1975, East Timor declared its independence but later that year it was brutally invaded and illegally occupied by Indonesia, which declared in 1976 that it now constituted its 27th province.

The Indonesian occupation of East Timor was characterised by repression and violence towards a native population which refused to accept its rule, led by separatist groups such as FRETILIN.

In September 1999, following the UN sponsored act of self-determination, Indonesia relinquished control of East Timor and the tiny half island country became the first new sovereign state of the 21st century on 20 May 2002.

In a recent interview, Prime Minister Rui Maria de Araujo said, “East Timor is one of the most Catholic countries in the world.”

He added that Catholicism and the Portuguese language are “two elements which have shaped our identity as a nation and this a good thing”.

East Timor became a sovereign state on May 20, 2002. Ninety-nine percent of its 1.2 million people are catholic.