General Themes: These witnesses to their faith endured so much did not receive the promises, we have.

Today is also the feast of St Aidan, Bishop of Ferns.

A reading from the letter to the Hebrews       11:32-40
Through faith conquered kingdoms, God will make provision for us to have something better, 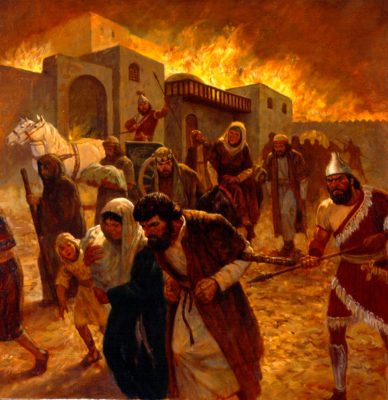 Gideon, Barak, Samson, Jephthah, or of David, Samuel and the prophets – these were men who through faith conquered kingdoms, did what is right and earned the promises. They could keep a lion’s mouth shut, put out blazing fires and emerge unscathed from battle. They were weak people who were given strength, to be brave in war and drive back foreign invaders. Some came back to their wives from the dead, by resurrection; and others submitted to torture, refusing release so that they would rise again to a better life. Some had to bear being pilloried and flogged, or even chained up in prison. They were stoned, or sawn in half, or beheaded; they were homeless, and dressed in the skins of sheep and goats; they were penniless and were given nothing but ill-treatment. They were too good for the world and they went out to live in deserts and mountains and in caves and ravines. These are all heroes of faith, but they did not receive what was promised, since God had made provision for us to have something better, and they were not to reach perfection except with us.

Jesus and his disciples reached the country of the Gerasenes on the other side of the lake, and no sooner had he left the boat than a man with an unclean spirit came out from the tombs towards him. The man lived in the tombs and no one could secure him any more, even with a chain; because he had often been secured with fetters and chains but had snapped the chains and broken the fetters, and no one had the strength to control him.  All night and all day, among the tombs and in the mountains, he would howl and gash himself with stones. 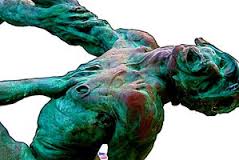 Catching sight of Jesus from a distance, he ran up and fell at his feet and shouted at the top of his voice,
‘What do you want with me, Jesus, son of the Most High God? Swear by God you will not torture me!‘ – For Jesus had been saying to him,
‘Come out of the man, unclean spirit’. ‘What is your name?’ Jesus asked.
‘My name is legion,’ he answered ‘for there are many of us.‘ And he begged him earnestly not to send them out of the district. Now there was there on the mountainside a great herd of pigs feeding, and the unclean spirits begged him,
‘Send us to the pigs, let us go into them‘.
So he gave them leave. With that, the unclean spirits came out and went into the pigs, and the herd of about two thousand pigs charged down the cliff into the lake, and there they were drowned. The swineherds ran off and told their story in the town and in the country round about; and the people came to see what had really happened. They came to Jesus and saw the demoniac sitting there, clothed and in his full senses – the very man who had had the legion in him before – and they were afraid. And those who had witnessed it reported what had happened to the demoniac and what had become of the pigs. Then they began to implore Jesus to leave the neighbourhood. As he was getting into the boat, the man who had been possessed begged to be allowed to stay with him. Jesus would not let him but said to him,
‘Go home to your people and tell them all that the Lord in his mercy has done for you’.
So the man went off and proceeded to spread throughout the Decapolis all that Jesus had done for him. And everyone was amazed.

The Gospel o the Lord       Praise to you, Lord Jesus Christ.

Today’s gospel reading portrays one of the most disturbed people in all of the gospels. He is portrayed as the living dead. He lives among the tombs, far from the community of the living. He was inflicting bodily harm on himself on a regular basis. The only response of the community to him was to try and secure him with chains and fetters, a version of locking him up and throwing away the key. Even that totally inadequate response to him was a failure. Such was the energy generated by his rage that he snapped the chains and broke the fetters. He was completely out of control, unapproachable. Yet, although the gospel story does not say so explicitly, Jesus approached him.

According to the gospel reading, the man caught sight of Jesus from a distance, ran up and fell at his feet. His words to Jesus were seething with anger, ‘What do you want with me, Jesus, Son of the Most High God?’ Jesus had every reason to walk away, but he didn’t. He spoke a word to him that healed him of his demons. The gospel reading says that he sat there beside Jesus, clothed and in his full senses. What does this passage tell us about Jesus? It tells us that there is nothing in our lives that we cannot bring to the Lord for his healing touch. It tells us that there is no one whom Jesus regards as unapproachable or out of bounds. It assures us that there is no disturbance or turmoil in our lives that the Lord cannot calm if we approach him and fall at his feet. After the man was restored to his right mind, Jesus gave him a task. He told him to go and tell others all that the Lord in his mercy had done for him. Whenever we open ourselves to the Lord’s healing and calming presence, he sends us out to share what we have received, to bring his healing and calming presence to all who need it.