Thirst for faith in China is strong: priest editor 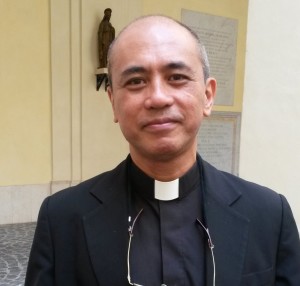 Many young people in Macau are affluent but realise that “even if you have everything you want, something is missing. They look for something beyond what they have,” Fr José Mandía told CatholicIreland.net recently.

Fr Mandía is director of O Clarim, a weekly Catholic newspaper in Chinese, English and Portuguese. A native of the Philippines, the priest has been working in Hong Kong and Macau since 1995.

For the last two years he has been living in Macau which like Hong Kong, is a “special administrative region” of the People’s Republic of China.

With an estimated population of over 550,000 people living in twelve square miles, Macau is the most densely populated area in the world.

The World Bank names it the fourth richest territory with most of its huge wealth coming from casinos. It is the only part of China where gambling is legal.

It used to be known as ‘sin city’ because of the casinos, but the arrival of a number of American companies offering a greater choice in employment has “improved the moral situation” according to Fr José.

China is driven by the idea of education and earning a good living. Hong Kong has 270 Catholic schools each with around 1,000 students.

Some people  will have their infants baptised to gain entry to the Catholic school system, but what is more common is a search for God that begins after young people leave school.

“There is a lot of rote learning and competition so at primary and secondary school they are busy memorising. Then they get a job and when things begin to become more stable in their work, they start to think of faith and approach the churches for instruction.” 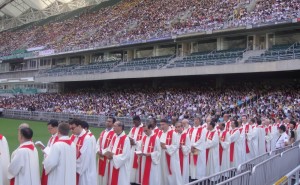 World Mission Sunday (19 October) in Hong Kong is a moving event, he says, where thousands of Catholics converge on the Hong Kong Stadium, So Kon Po, for a special Mass to celebrate faith.

At Easter time around 3,500 adults are baptised in Hong Kong at and there are many more infant baptisms.

In mainland China, the numbers seeking faith is even more impressive.

“In China there are also baptisms on all the major feast days like Christmas and Pentecost,” he says and this occurs right across China.

What is common in the stories of these adult converts to Christianity is their fervour.

As an example, he tells the story of Dr Lee from Peking who came to work in Hong Kong for two years. At school and university he had been told there was no God.

He told Fr José, “We didn’t protest, but we talked among ourselves saying ‘There must be something’.”

In Hong Kong, he picked up Pope John Paul II’s book Crossing the Threshold of Hope and began to study Church history.

Lee’s wife and family are all involved in the Communist party, so he could not be baptised but Lee says he is now a believer. “He reads the bible every day and tries to pray.”

Chi from Shanghai met Christianity in the US, where a Baptist pastor encouraged him to read the bible.

He did so but told Fr José he wanted to “have the word of God proclaimed to him every day”. He stumbled upon the Catholic church and became fascinated by the lives of the saints whom he believed to be the living proof of the authenticity of the Catholic church.

“If there were no saints I would not believe in the Catholic Church,” he told Fr José.