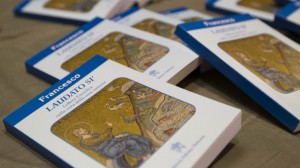 Irish eco theologian Fr Sean McDonagh, who advised the Vatican on the first draft of Laudato Si, Pope Francis’ ground-breaking encyclical on the environment, has called for a three-year synod in the Irish Church to educate people about its contents.

Speaking ahead of Trócaire’s major conference on climate justice in Maynooth on Monday and Tuesday 22-23 June where he is due to address delegates, Fr McDonagh suggested that three years would give people an opportunity to address Laudato Si’s recommendations in the local church in the first year, in the church nationally in the second year and globally in the third year.

He told CatholicIreland.net that he was “very happy with the encyclical” and described it as “well written, thoughtful and inclusive” He emphasised that he was “delighted to see biodiversity and water in it”.

He said including biodiversity was essential for a Church that is pro life.

According to Fr McDonagh, Francis’ document marks a “huge change” in the Vatican’s approach to the environment and ecology.

The Columban missionary said the encyclical was “a new departure in the sense that it is the first document that talks about the magnitude of ecological crisis and the urgency of dealing with it; it is also the first document that marries science and religion; and it moving these issues from the Church’s periphery into the centre.”

The much anticipated encyclical is seen as a major intervention by the Pope in the climate change debate and likely to impact on the UN Climate Change Conference in Paris in December.

Francis’ strongly worded call for ecological conversion and an urgent rethink of humanity’s relationship with the Earth is addressed not only to catholics but to all of humanity including governments, industry and individuals.

“From Pope Paul VI’s time, the Church was beginning to talk about ecology but the issue was in its own little space,” Fr McDonagh explained.

“With John Paul II it began to get a little bit more central but in his best encyclical like Sollicitudo Rei Socialis, the concern for social things in 1988, it only had a little place within an understanding of economics.”

He believes this is set to change.

“This is a great document but it is way ahead of where the whole Church is at the moment on these issues. I’ve been to UN Conventions on Climate Change and the Church hasn’t been there at these conferences in any significant way. The only way you change that is through education. That is something John Paul II asked for that 25 years ago, but it didn’t happen.”

He recalled that 37 years ago in the Philippines he had seen the impact of the destruction of the tropical forest. “At that stage nobody was listening. I published ‘Care for the Earth’ in 1986 and it took two years to get a publisher.”

He said Laudato Si is asking for “enormous changes” and doing it “ecumenically” as it paid tribute to the campaigning of Orthodox Patriarch Batholomew I.

Archbishop Diarmuid Martin of Dublin also welcomed the encyclical and said he was “very impressed” with it and that it was “very strong” on specific concerns.

The Archbishop cited the prayer which Pope Francis had chosen to close the encyclical.

“He brings together respect for the environment, respect for people and for beauty and sets the whole thing in a religious framework to help all of us to see that God is trinity-communion. We all live here together and we recognise the particular responsibility that we as human beings have not to look after just ourselves but to look after the harmony of everything.”

The landmark 184-page encyclical warns that respect for the environment must be accompanied by respect for human dignity.

The Pope admonishes those who show “more zeal” for “protecting other species than in defending the dignity which all human beings share in equal measure.”

It is “clearly inconsistent” to combat the trafficking of endangered species while remaining indifferent toward the trafficking of persons, the poor and the destruction of “another human being deemed unwanted” through abortion, embryonic experimentation and population control, the Pope states.

Back in 1971, Pope Paul VI published an apostolic letter entitled Octogesima Adveniens or ‘A Call to Action’.

In the letter, he listed 11 new social problems that the Church should confront, including the environment. He wrote, “Man is suddenly becoming aware that by an ill-considered exploitation of nature he risks destroying it and becoming in his turn the victim of this degradation.”

A year later, Paul VI addressed the UN Conference on the Human Environment in Stockholm, where he condemned the growth of nuclear and biochemical weapons and warned of “the imbalances caused in the biosphere by the disorderly exploitation of the physical reserves of the planet.”

Pope Francis’ immediate predecessor, Benedict XVI was actually termed the ‘Green Pope’ for his progressive stance on climate change, promoting renewable energy and calling for a closer communion between Catholics and nature.

In his message for World Day of Peace in January 1990, Pope John Paul II warned that world peace is threatened not only by the arms race, regional conflicts and continued injustices among peoples and nations, but also by a lack of due respect for nature, by the plundering of natural resources and by a progressive decline in the quality of life.

“Faced with the widespread destruction of the environment, people everywhere are coming to understand that we cannot continue to use the goods of the earth as we have in the past.”

Calling for a new ecological awareness, he said the ecological crisis was a moral problem and named the indiscriminate application of advances in science and technology.

“The gradual depletion of the ozone layer and the related greenhouse effect has now reached crisis proportions as a consequence of industrial growth, massive urban concentrations and vastly increased energy needs. Industrial waste, the burning of fossil fuels, unrestricted deforestation, the use of certain types of herbicides, coolants and propellants: all of these are known to harm the atmosphere and environment. The resulting meteorological and atmospheric changes range from damage to health to the possible future submersion of low-lying lands,” he wrote.

Pope Francis has now warned that “The earth, our home, is beginning to look more and more like an immense pile of filth,” and that it is “unfettered greed” which causes pollution, inequality, and global warming, all “a result of human activity”.