Terrorists are making ghost towns, according to Burkinabe priest 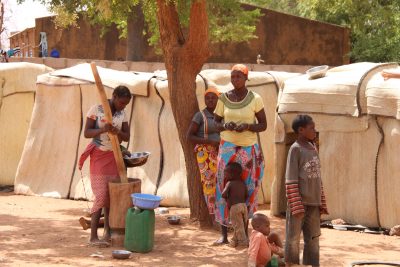 These families are IDPs because of the terror in the north region of the country. People from several villages, Christians and Muslims, are leaving here. No water and no school available. © Aid to the Church in Need

According to Catholic charity Aid to the Church in Need (ACN), a priest forced from his parish in Kaya Diocese in Burkina Faso said Islamist groups are making significant gains in the north.

“Out of the 75 villages in my parish, there are no more than 10 that are still inhabited. Everyone else has fled. And, given that certain key villages have been abandoned, a large part of the territory is now in the hands of the terrorists, outside the control of the state,” the priest said.

The priest added that most people feel helpless against the armed extremists and “all the more so at this time when all the emphasis is on the coronavirus pandemic, forgetting that this terrorism is causing as many and indeed more victims than COVID-19”.

Burkina Faso has struggled with armed Islamist groups from Mali and other West African states operating in the country for the last five years. Another priest from Kaya Diocese said that villages are “almost completely deserted” and that their “entire rhythm of life has been disrupted, although there are still some signs of hope”.

All those in Burkina Faso to whom ACN spoke asked to remain anonymous, fearing for their own safety. The priest added: “In my parish, where many people have sought refuge, there are problems in obtaining basic necessities. The crucial problem is always water. It is very difficult to obtain this precious liquid, and this means that the women are forced to return to the neighbouring abandoned villages, with all the risks that it implies, since they are under constant threat from the terrorists, in order to try and obtain water and transport it back on their tricycles.”

In the Kaya region, key villages are cut off from the towns which previously supplied them. In the departments of Bourzanga and Djibo attacks have occurred on a daily basis. The few towns and villages which are still inhabited are sheltering thousands of IDPs (internally displaced persons). ACN was told that in Djibo town itself — which has been cut off from the surrounding area because of jihadist activity since mid-January — “there is no transport, no food supplies, no possibility of entering or leaving the town. There is a shortage of water, vehicle fuel and food — frequent electricity cuts and so forth.”

There are up to 150,000 IDPs in Djibo town according to the national emergency relief and rehabilitation agency CONASUR (Conseil National de Secours d’Urgence et de Réhabilitation).

The only other populated town, Arbinda, is blockaded and sheltering around 60,000 IDPs. According to data gathered by ACN during a February 2020 project trip to the country, there may be more than a million IDPs in the country.