Church cannot afford to let its guard down on safeguarding 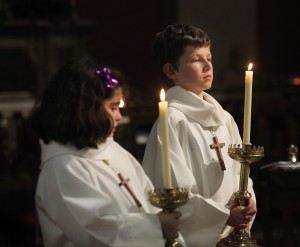 Archbishop Diarmuid Martin of Dublin has warned that the Church “cannot afford to let our guard down” in the area of child safeguarding otherwise “sexual predators will seek out our weak points and break through the weaknesses of our systems.”

Speaking at a Mass to mark the tenth anniversary of the establishment of the Child Safeguarding and Protection Office in the archdiocese of Dublin, the Archbishop paid tribute to work achieved by all those associated with the Office.

But he added, “That work is not over. The sexual abuse of children continues in our world.”

He also rebuked those in the Church who were “all-too-slow” in recognising the extent of the “criminal abuse of children” by priests.

At a ceremony in the Pro Cathedral on Sunday attended by 400 child safeguarding representatives from parishes across Dublin, as well as priests and representatives of survivors of abuse, including Marie Collins and Ken Reilly, Archbishop Martin said that in many cases the victims of this abuse had suffered profound hurt which they still bore to this day.

He urged the Church to do more to reach out to survivors of clerical abuse and he underlined that any outreach needed to go beyond what was offered through ‘Towards Healing’, the Church’s counselling and support service for victims of clerical abuse.

The leader of the Church in Dublin said the Church needed to create “an open door and a safe space for those survivors who still fear telling their story and who still live alone with their anguish.”

He acknowledged that people were angered by the Church’s response to clerical abuse in the past.  “I am reminded of the words of Pope Francis on the eve of his election: ‘The evils that, in the passing of time, afflict the ecclesiastical institutions have a root in self-referentiality, in a sort of theological narcissism’.”

He continued, “The institution in protecting it own, failed its children. The ‘Kingdom of Jesus Christ’, however, is a rule, where children must be the specially treasured – not an inward-looking institution.”

Paying tribute to Cardinal Connell’s role in establishing the Child Safeguarding and Protection Office back in 2003, the Archbishop said it had over the years grown to be a significant common effort to ensure that the inadequate response of the past would truly become a thing of the past. 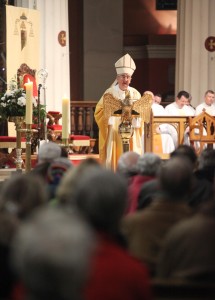 Speaking after Mass to CatholicIreland.net, the Archbishop explained that from his meetings with survivors, he realised that some of them “are in a lonely place.”

“Very often they have nobody to talk to – they are not a member of an association. They were abused in a way that the pressure was put on them to keep it secret.”

He said they would like to have a space where they could come together, meet one another and support one another. “Some are still finding it very difficult to talk about what happened,” he explained.

During the Mass, prayers were said for those victims of abuse who could not cope and had died by suicide.

The Church hasn’t “sent out a sufficient word of welcome to those have been abused,” the Archbishop told CatholicIreland.net.

Andrew Fagan, the current Director of Child Safeguarding and Protection Office in Dublin, explained that his office still encounters some resistance to Garda vetting especially in relation to parish volunteers who have been in roles for years.

Tribute was paid to Cardinal Desmond Connell for setting up the safeguarding office in 2003. Andrew Fagan said that in 2004, Diarmuid Martin became archbishop of Dublin and “a different and new message” was heard.

Before that, he said, “there had been plenty of expressions of regret and the sense that we did our best … we did not really understand what was happening. Whether or not that is true – it is not helpful,” Mr Fagan said.

“Archbishop Martin told us that abuse of children within the diocese was intolerable and would not be tolerated. He matched words with deeds,” Andrew Fagan said.

He explained that at the last count, the archdiocese of Dublin had 381 parish safeguarding representatives and that did not include priests, parish sisters and deacons who were involved in safeguarding.

Survivor of abuse, Marie Collins told CatholicIreland.net that the child protection service in Dublin has been “very well set up and has worked very well. There are good strong child protection measures in place – it is a vast change from the past and it is good to see.”

But she added “there is still a lot of work to be done – we can always make sure it is safer.”