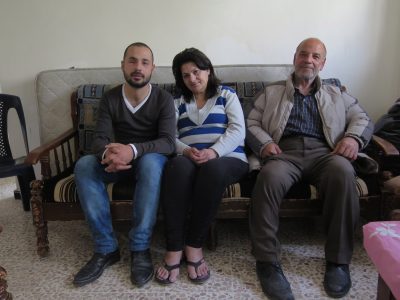 Syria, March 2018.
Elias Ghattas with his wife Lina Salloum and their son Thamin Ghattas in Homs. The family is being helped by ACN to rebuild their house.

In 2012 the Ghattas family, Lina, Elias and their two sons, fled their home city, Homs, when it was destroyed by mortar attacks. For several years they lived in accommodation funded by Aid to the Church in Need (ACN), the charity for persecuted Christians.

Now that their hometown has become a much more stable place to live, the Ghattas’ home has been one of hundreds chosen for repair, thanks to the generous benefactors of ACN. Doors and windows have been replaced, a basic kitchen installed, and a bathroom and other necessities put in place. This has allowed the Ghattas, among many other families, to be able to get back home this Christmas.

Speaking to ACN, Elias Ghattas shared: “For me, returning home is like being reborn. I can’t even begin to describe the joy I am feeling. After so much suffering and uncertainty, I feel safe again…Christmas reminds me of the feeling of security that comes from being in a family.”

While being home is an incredible relief for the Ghattas, other hardships still continue. The small Christmas tree standing in the corner of their living room, for example, has been borrowed; it is almost certain that they won’t see their eldest son who was doing his military service of two years when the war broke out and, eight years later, is still not out of service; and Bashar, the younger son, lost an eye when a bomb exploded beside their house and is still out of work.

However, the family puts their trust in God. Lina said: “We will go to church on Christmas Eve. There, we will sing Christmas songs and pray. Then we will return home and I will prepare the traditional Syrian meal…We will sit close to the oven and celebrate until late into the night.”

The family wishes to thank the friends and benefactors of ACN who have helped them return home and more. They have placed the gift presented to them by ACN, a small sand-coloured tablet of stone inscribed ‘Jesus is my rock’, under their Christmas tree as a place of honour in their home.

Elias said: “We have no words to express our thanks to ACN and all those who support the charity. They gave us hope and a new chance in this life. From the bottom of our hearts, we hope that God will strengthen and support them in their efforts to continue to help those most in need and sow hope.”